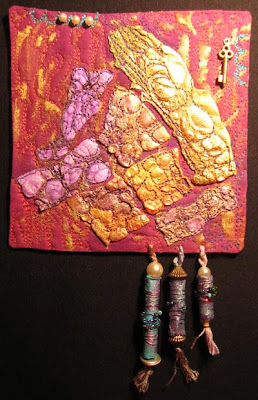 Here’s a small piece (about 5 inches square) I made today using some of the small pieces of melted Tyvek I created over the weekend. It is amazing how easy it is to sew through with the machine. I sewed cautiously through the parts where it had melted more heavily, but did not have any problems at all. I had fun “drawing” around the bubbles. Just love the metallic sheen that the Lumiere paints give the Tyvek pieces.
Posted by Susan Brubaker Knapp at 10:05 PM 2 comments: 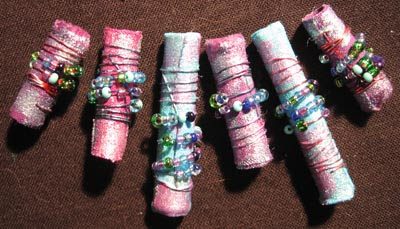 I made these beads today. I took strips of my hand-dyed fabric, coated one side with Aileen's glue, then wrapped them around small segments of plastic drinking straw. Then I wrapped them with 28-guage colored copper wire strung with seed beads. After that, I painted them with a bit of Lumiere for some extra sparkle.
Posted by Susan Brubaker Knapp at 4:05 PM 1 comment:

Today I went outside in the sweltering heat with my iron and played with Tyvek. I started with a used USPS priority mailer made of Tyvek. I cut small pieces, painted them on one side with Lumiere and let them dry (see the second photo). Then I placed them between layers of my Teflon pressing sheet and ironed them (at medium to high heat), pressing very lightly. I did this OUTSIDE (the fumes are noxious) with a steady breeze for ventilation.

The result is a very lightweight, somewhat flexible, durable piece. They shrink by about 1/3 to 1/2. The bubbles form away from the heat source, so you can choose to have concave bubbles or convex ones on the painted side, depending on which side is down when you iron. If you press hard, you get a flatter, thinner finished piece; mine reminded me of gold leaf. The size of the bubbles seems to depend on how hot the iron is, how long you iron, and how hard you press down. If you iron longer, you get interesting holes.

This afternoon, I sewed a few pieces down to a fabric background, and embellished them with beads and hand-dyed perle cotton to make a little pin (last photo). My friend Grace Howes brought this beautiful fabric and perle cotton back from England for me! 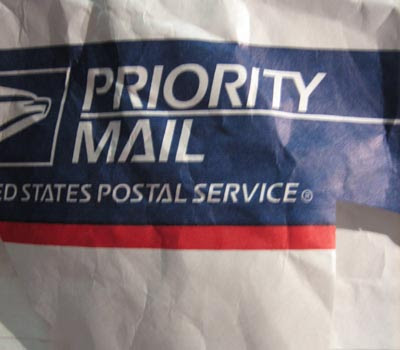 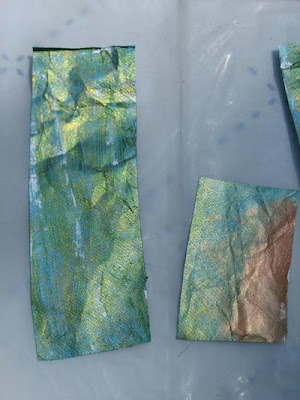 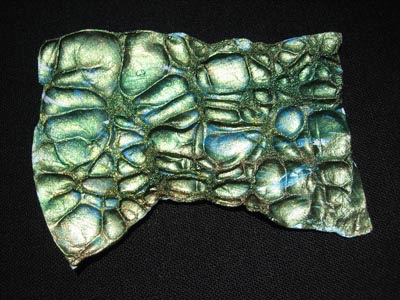 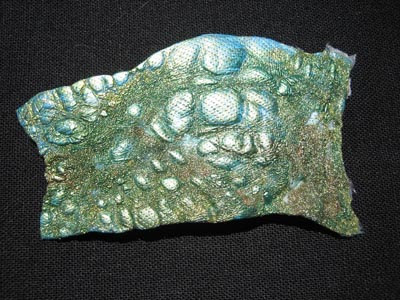 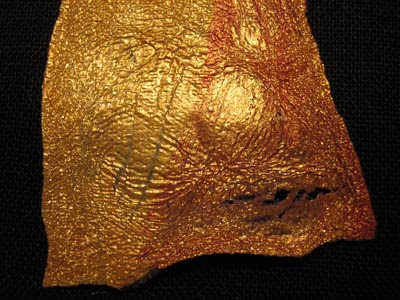 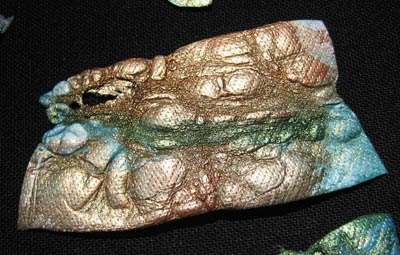 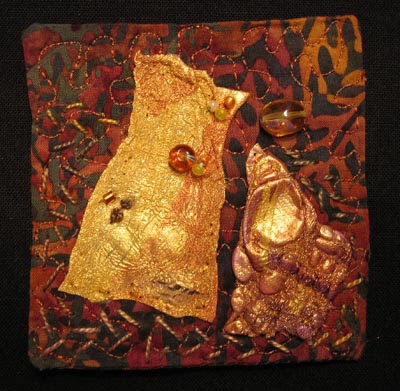 One of my goals for this year is to try using some new materials and techniques that I can use in my art quilts. For this small experimental piece, I used a rubber stamp of a woman’s face and Fabrico Craft Ink to make the squares. I liked the way some imprints were very strong, and other seemed to be fading away. I sewed them down and frayed them around the edges. They looked too white against the background, so I blotted them with some diluted fabric paint and immediately ironed it dry. This created some interesting splotching, which you can see best on the middle face. Then I took some of the threads that came off my hand-dyed fabrics after washing and drying them, and couched them down with a free-motion quilting stitch. 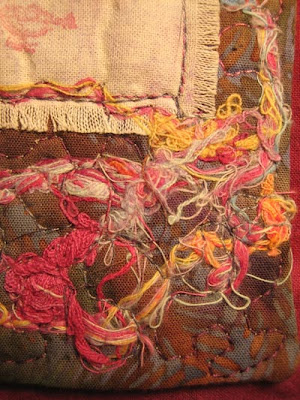 Posted by Susan Brubaker Knapp at 11:48 AM 2 comments: 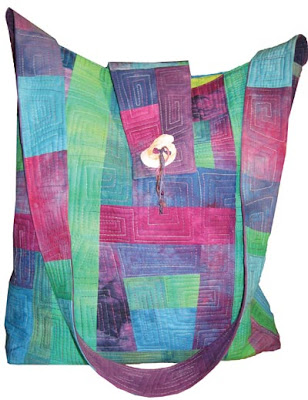 This a purse I finished today. I used some of my own hand-dyed fabrics and some purchased from others. It is about 15" high, big enough to lug around all my stuff (I usually carry a fairly large purse) and it has lots of interior pockets and a loop to hold my cell phone case inside the purse and within easy reach by the third ring. That is a sea-polished oyster shell on the flap (it covers the spot where I sewed on velcro to hold the flap shut). I used one of those wonderful acrylic bases, “Bag-E-Bottoms” by Lazy Girl Designs, in the bottom to make it stand up.
Posted by Susan Brubaker Knapp at 5:14 PM 2 comments:

My friend Grace Howes and I just returned from the Asheville Quilt Show, and I am completely exhausted! It took us four hours to get from Mooresville to Asheville, normally a two-hour trip. Apparently a tractor trailer heading east on I-40, the primary road through the mountains, crashed and spilled its entire lot of lemons and limes all over the interstate. So the interstate was completely closed for most of the day. We had to go on smaller back country roads, over some gravel roads, and up and down big mountains with harrowing hairpin curves, to get to the show. Good thing Grace and I like to talk. We had a lot of time to catch up.

When we finally got there, we had only 50 minutes to see the whole thing. We talked to lots of people who had the same travel experience, some who actually got to see and smell the lemons, and dreamed of lemonade to quench their thirst after sitting in the 90 degree heat without air conditioning (to avoid car overheating). We ran through the show, willy-nilly, trying to take as many photos as possible so we could look at the quilts more later. It was crazy.

The show was very nice, with a lot of quilts from outside the area, from all over the country, even. Several I had seen before at Houston at the International Quilt Festival, and in magazines. The show was held at the North Carolina Arboretum, which is very lovely. It is on my list for a return visit for sure.

“Harbinger’s Hope” took a third place ribbon in the “Other Techniques" category, which included many of the art quilts! I was very pleased to have won this ribbon, especially after seeing the caliber of work of the competition. Definitely a show I will go back to see next year, but with more time to examine and admire, I hope.

The return trip (by a different route, because the interstate was still closed) took three hours. Arrrrgh!
Posted by Susan Brubaker Knapp at 10:05 PM No comments: