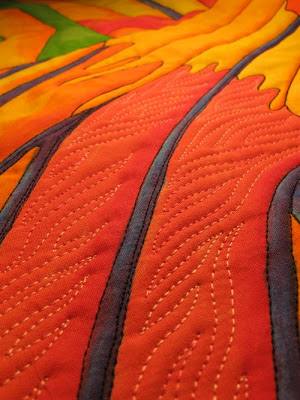 I finished the dark blue threadwork on “Lepidoptera” today and started working on the other colors. I am waiting on my shipment of varigated Aurifil thread, but I did have one spool of their Cotton Mako 28 in a varigated pink. It is a bit heavier than what I ordered, but I am so eager to dig in that I decided to use it on some of the pink areas.

This is the first time I’ve used Aurifil thread for machine quilting. The first thing I noticed is how beautifully shiny it is. I almost thought it was polyester, and checked the spool twice. Yep, it’s cotton! 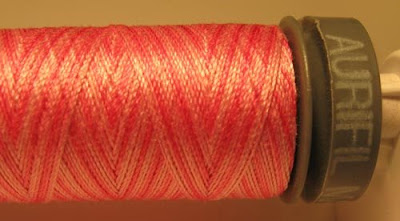 The varigation is very nice on this thread, going from a very pale, almost white pink, to dark pink. In the photo below, you can see how shiny the Aurifil thread is in comparison to the blue thread, which is a Mettler solid blue. 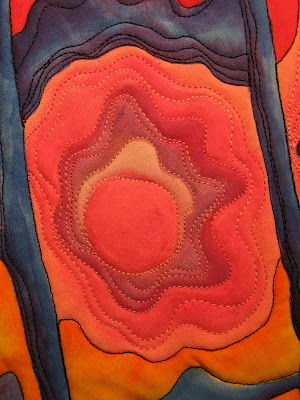 I have heard that Aurifil thread is very strong, and that it leaves very little lint in (and on) your machine. I have not used it enough to know if this is true for me … but I have a long way to go on this quilt. I’ll watch for this, and post about it later. So far, so good!
Posted by Susan Brubaker Knapp at 5:40 PM