Here are photos of some of the exercises I am doing for my studio journal online class. The first two are frottage, or rubbings, done with a blue crayon on surfaces around my home. My instructor, Sharon Boggon, describes frottage as a translation of a real texture into a flat visual image – the illusion of touch in a two-dimensional form. 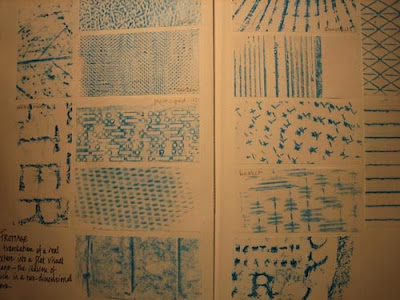 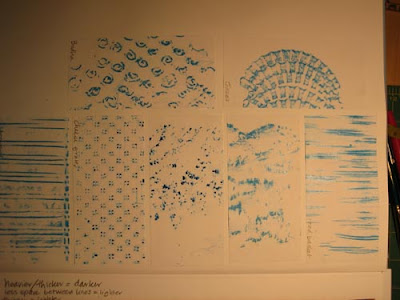 Things I learned:
1. My refrigerator has a really cool texture.
2. Man-made textures are as interesting as natural ones, although they are usually more uniform. That can be good or bad, depending.
3. Some of these would be fascinating to execute with hand or machine stitching, or to paint or screen onto fabric.

The photo below shows another exercise where we were supposed to take Van Gogh's painting Starry Night and interpret it as if we were stitching it in black and white. The photocopy of the painting is at the top of the page; my version is below. 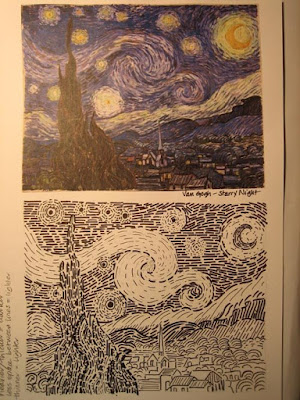 What I learned:
1. This is a lot harder than it sounds.
2. It is hard to interpret color tone (colors that look lighter to the eye, like yellow, versus colors that are darker, like navy blue and black) in just black.
3. Heavier/thicker lines read dark, and lighter/finer lines read light.
4. It was hard to get the level of detail I needed in the village (lower right) and still make it dark. As a result, the village is not nearly as dark as it should be, if I am trying to be faithful to Van Gogh's work. The areas that should be lightest are the stars, the swirl in the sky, and the are just above the hilltops. I got most of the stars and the haze around them too dark. The darkest thing of all in the painting is the cypress tree, and it is not nearly dark enough in my version.
5. You can create the illusion of light by leaving more space between the lines, but then you can't get much detail.
6. I love Van Gogh's work as much for the texture as for the colors and shapes. It is interesting that this is the same thing I love about quilting... how the quilt looks nice before it is quilted, but you really just see the colors and shapes. Then when you quilt it, it comes alive and is so much more textural and interesting.
7. I'm really glad I don't have to work in just black and white!
8. A lot of people out there apparently don't know that the song "Starry Night" by Don McLean is about Vincent Van Gogh!

According to Don McLean's official website, "Don McLean wrote the song in 1971 after reading a book about the life of artist Vincent Van Gogh. In the 1970s, the Van Gogh museum in Amsterdam played the song daily and a copy of the sheet music, together with a set of Van Gogh’s paint brushes, is buried in a time capsule beneath the museum. The song itself was an even bigger international hit than American Pie. In 1972, it reached number 1 in the UK and number 12 in the USA. In recent years, the song has become even more well known thanks in part to Josh Groban’s successful version and to the song being sung by contestants on high profile shows such as American Idol and BBC Fame Academy."

Starry, starry night.
Paint your palette blue and grey,
Look out on a summer's day,
With eyes that know the darkness in my soul.
Shadows on the hills,
Sketch the trees and the daffodils,
Catch the breeze and the winter chills,
In colors on the snowy linen land.

For they could not love you,
But still your love was true.
And when no hope was left in sight
On that starry, starry night,
You took your life, as lovers often do.
But I could have told you, Vincent,
This world was never meant for one
As beautiful as you.

Starry, starry night.
Portraits hung in empty halls,
Frameless head on nameless walls,
With eyes that watch the world and can't forget.
Like the strangers that you've met,
The ragged men in the ragged clothes,
The silver thorn of bloody rose,
Lie crushed and broken on the virgin snow.

Now I think I know what you tried to say to me,
How you suffered for your sanity,
How you tried to set them free.
They would not listen, they're not listening still.
Perhaps they never will...

Here's an interesting post about the song from Claudia C. Pharis on sing365.com: "This song touches me deeply. Some of us live closer to our humanity than others, and it is these among us who are least able to bend themselves to countenance the distance from our humanity that modern life often requires. Such people often wind up homeless, artists, schizophrenics, suicidal, . . . We ignore them at our peril. They carry messages for us that we need to understand."

Very interesting that she included "artists" in the list of things that "such people" "wind up" as! But I do agree with what she says. I have always felt that our civilization's artists represent one of the most critically important parts of what it means to be human -- creativity -- and that we pay most of them far too little attention and respect. Well, unless they are mega rock stars, and then we give them all the money and glory they need to feed their huge egos, expensive clothing and housing urges, and substance abuse habits, if they are so inclined.

By the way, did you know that the song "Killing Me Softly With His Song" was written by Lori Lieberman about Don McLean? It was a hit song for Roberta Flack in 1973 and for The Fugees in 1997.
Posted by Susan Brubaker Knapp at 1:35 PM 2 comments: