I completed “First Snow” in late March, but was not able to share it with you until now, because the exhibition curators – Leslie Tucker Jenison and Jamie Fingal of Dinner At Eight Artists – wanted to keep the theme and pieces a secret until the exhibition was decided  and announced. I love the theme of this exhibition. Leslie and Jamie explained it this way:

Consider the following:
The unfurling of a flower.
A hummingbird in flight.
A magical moment shared with a lover or friend.
The birth of a child. A personal milestone.
The realization of a dream.
A treasured memory.
The sacred moments of the ordinary.
These are the Exquisite Moments that make us who we are.

I’m lucky; I’ve have had a lot of Exquisite Moments in my life. It was hard to choose. But I’ve been wanting to make a piece that was about snow, and about my kids. We don’t get very much snow here in North Carolina (compared to my childhood in Pittsburgh, Pennsylvania). I remembered all the times I played with my girls in the snow, and especially about the very first snows of the season, which are even more magical than the others. I went back and found these photos of them trying to catch snowflakes on their tongues. I think this was about 2003 or 2004: 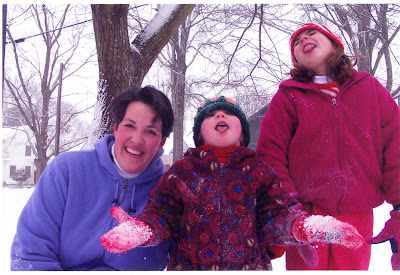 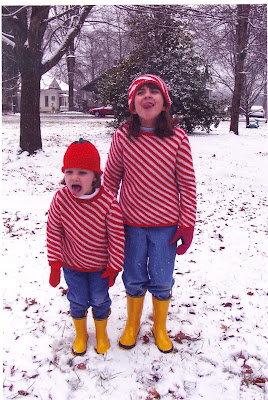 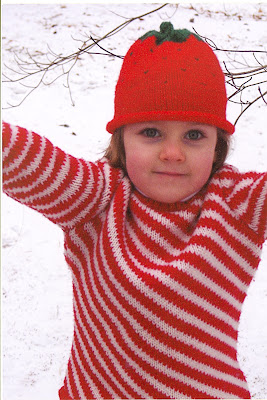 Working from these photos, I changed the positions of the bodies so that they fit better in the very tight vertical format (24" x 60") needed for the exhibition. I used my fusible applique method (described in my book, Point, Click, Quilt! Turn Your Photos into Fabulous Fabric Art) but fused everything down to stabilizer (Pellon 910 interfacing). I also changed the colors and simplified the jackets so that they were bright, solid colors: 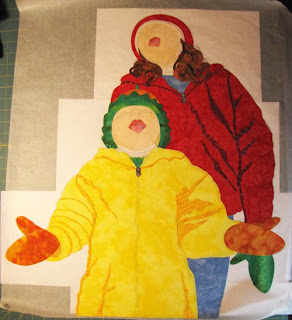 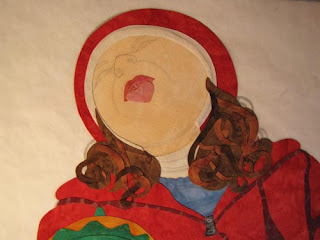 Pencil marks on the faces (above and below) give me guidelines when I paint. 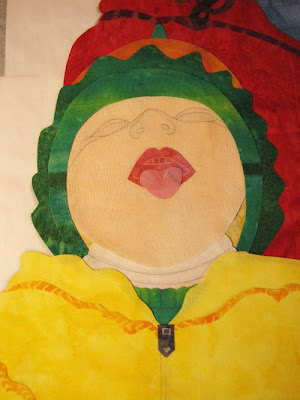 I painted the faces with acrylic paint (my favorite, ProFab Transparent Textile Paint by ProChemical & Dye), then cut out the figures. I worried a bit that the blush on their cheeks was too strong, but it really was that red in the photographs. They had been out in the cold, windy air for a while.

Then I thread sketched the figures, adding details.

With the bodies completed, it was time to position them on the background. I had planned to use this darker blue fabric for the background, because the snowflakes would really show up on it. But it turned out to be too dark and vibrant a hue. It didn’t look anything like a sky, especially a daytime, cloudy winter sky capable of producing snowflakes. And because the value was as strong as the red of the jacket, the figures didn’t stand out as much as I wanted. 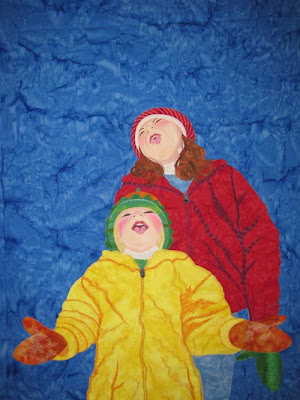 I found a lighter, grayer blue background I liked better, then tested the position of the snowflakes by placing the snowflake sketches on top of the piece. My goal was to get a nice smooth swirl from the top left into the area near Julia’s mouth.

Once I had the snowflakes where I liked them, I put them behind the background fabric and traced them with a white chalk pencil, then put some stabilizer behind them and thread sketched the snowflakes. I used Aurifil Cotton Mako 50, a perfect weight to get these fine details. Of course, my cat Wicked had to take a nap on the piece when I left it to grab lunch one day. It wouldn’t be my work without a little cat hair on it! 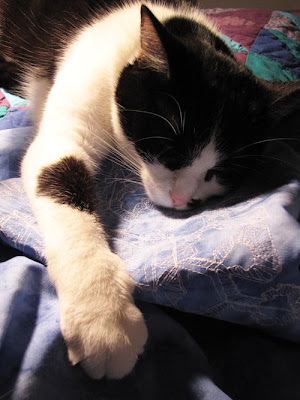 After I had completed all the thread sketching on the snowflakes, I decided that they weren't standing out enough against the background. This is something I had worried about when I decided to use the lighter background. So I went back and added some metallic white/silver paint in some spots on them.

The piece was coming together, but the swirl of snowflakes still wasn't standing out enough.
Lea’s jeans were also a problem. See how they completely blend in to the fabric in the lower right corner? I’d used the same blue fabric as the background when I was planning to use the darker fabric for the background.

I added lots of little dots of paint around the snowflakes. I thought it needed them to better define the swirl, and add a bit of sparkle and magic to the snow. I also darkened Lea’s jeans:

Now it was time to quilt! I layered the quilt top with backing and a batting I’ve never used before, Dream Wool by Quilters Dream Batting. I like using wool batting for large pieces I have to ship to exhibitions, because wool has more of a “memory” and bounces back after it has been folded better than cotton. I was very pleased with it, and found that it gave this piece a little more texture than some of my pieces I’ve done with cotton batting (request and select loft) by Quilters Dream.

Posted by Susan Brubaker Knapp at 10:10 AM 9 comments: