Lessons from the purple orchid 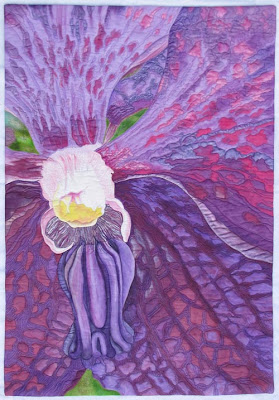 This is my piece, Purple Phalaenopsis, today, after major changes. I almost burned it in a ritualistic bonfire a few days after Christmas. In the process of reworking this piece, I have learned some important lessons about art, the critiquing process, and about how much to trust myself as an artist.

This is how it looked about a month ago, when I took it to a meeting of Fiber Art Options, a group of fiber artists in the Charlotte area: 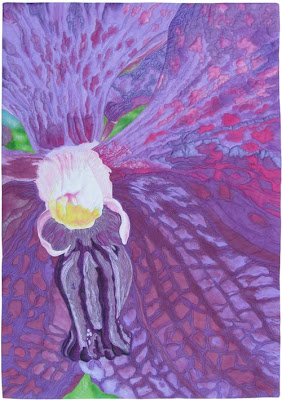 I was generally pleased with it overall (okay, to be honest, I was pretty excited about it), except for the labellum. That’s the fancy name for a specialized petal that acts as a landing platform for the pollinator. It is sometimes called the “lip.” It’s right below the column (or “nose”), which is usually a white waxy structure in the center, and contains the male and female reproductive organs of the flower. On my quilt, it is that elongated darker purple blobby thing below the white area.

I showed the piece to my group, and they confirmed my suspicions.

They told me that I had quilted the labellum too heavily. (Lesson 1: Quilt heavily on areas that should recede; quilt lightly on areas that should come forward.) It also didn’t help that it was darker, because dark things also appear to recede, while light things appear to come forward. Part of the reason for this problem was that I was trying to faithfully reproduce my photo. (Lesson 2: As an artist, you have the right and the duty – and the artistic license – to change things so that that your piece works better.) 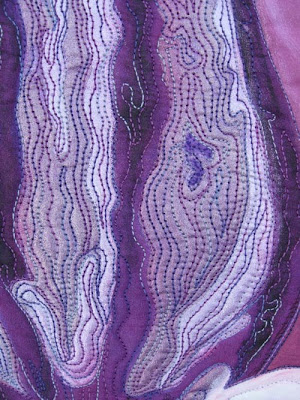 Then they moved on to other problems. They told me my background colors were too bright and too clear, and popped out too much, and needed to be toned down. They told me that there was visual confusion as to where my petals were, because the colors along the edges were too similar. They told me a bunch of stuff, and one person suggested one solution, and another suggested a different solution, and before long, my head was spinning and I considered running from the room. I stayed because I like these people, and I respect them. I trusted them to tell me what they really thought, and they did. (Lesson 3: If you ask for a critiqué, you have to be prepared for criticism. But you still have the right to draw a line in the sand, and politely explain that you’ve had as much as you can handle for that session.)

And so, after leaving that meeting, over the next week or so, I pondered what to do. I lamented my lack of formal art training, which might have helped me see what I needed to see, and avoid these pitfalls. I stopped thinking about the joy that creating the piece had given me – the process – and obsessed over the finished piece – the product. I let all the criticisms from others, and my own negativity, get to me, and I started hating that purple orchid staring down at me from my design wall. (Lesson 4: In the end, it doesn’t matter what others think as much as what you think about your own work.)

And then, determination set in. That orchid was not going to defeat me. I was going to fix it. I would rebuild it, better than before. (Cue the theme song from "The Six Million Dollar Man.”) I got out my paints and made some places lighter (the edges of some of the petals), some places darker (the areas of the petals that were going behind other petals), and some places muddier (the green background areas).

I repainted that d**n labellum. I put it back up on my design wall and pondered some more. Nope, still not right. I took it down the next day and tried again. And again. And then I cried (just the littlest bit). In the darkest hour, I started seeing it going up in flames in the backyard, and toasting marshmallows over it on a cold, clear winter’s night. A revenge fantasy. Go to hellum, labellum! I went to bed that night despairing.

Morning came, and, rested and more hopeful, I decided on a different tack. It didn’t make sense to burn it. Its image was already being used in online advertising for our groups’ exhibition. No, I would admit defeat, and with proper humility, begin again. Not on the whole piece, but on the most problematic part: the labellum. I re-sketched and painted that piece on a fresh piece of white fabric. I cut it out, leaving a seam allowance, and pinned it in place, and appliquéd it to the background, covering the hideous part. I stuffed it with a bit of fiberfill, so that it would physically stand out a bit more. Appliquéing was difficult, since the paint had made the fabric very stiff, and since it was in the center of the quilt, it was impossible to scrunch up the fabric as I worked. My fingers were literally bleeding while I worked. But I persevered. Next, I quilted it, but only a little bit, to emphasize the folds and curves. (Lesson 5: Things are always better in the morning. Sleep and a fresh perspective can work wonders. And “if at first you don’t succeed, try, try again.”)

Did it look better? I wasn’t sure. I was so frustrated that I didn’t know whether to trust my judgment and my instincts, and frankly, I had reached the point where I didn’t care. My goal was to sew the new labellum on there and hang it up for a few days. If I still hated it, there was plenty of time for that backyard conflagration. I’m still not sure what I think. Probably it is better. I haven’t burned it yet.

Here’s the next piece finished (except for the facing) and ready to enter the fray. As my husband is fond of saying, “We soldier on.” 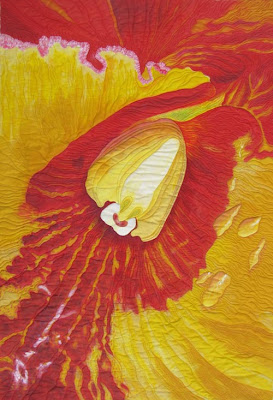 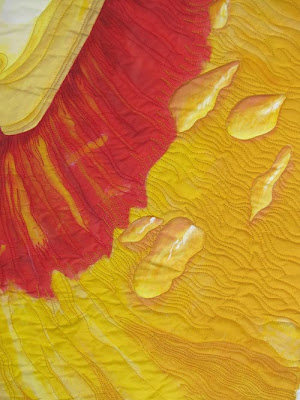 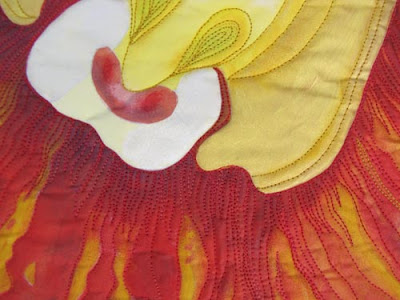 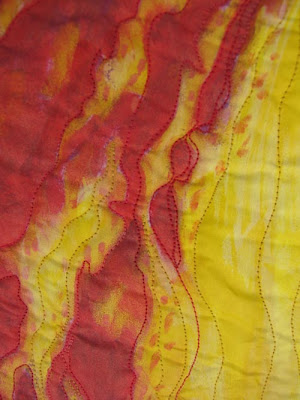 Posted by Susan Brubaker Knapp at 8:30 AM 22 comments: