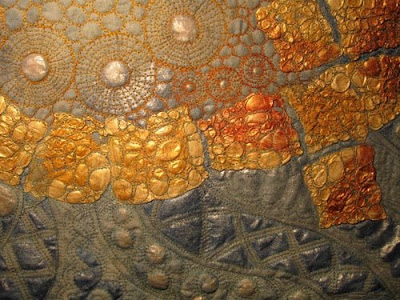 I’ve spent much of the past week getting my lesson plans together in preparation for teaching a class called “Tyvek: Explorations for the Creative Stitcher” on www.joggles.com. It starts next Wednesday, Nov. 5. In doing so, I decided to create a new piece using melted pieces of Tyvek I had made a while back.

The working title of this piece is “Celtic Crown,” since the pieces are arranged on the background in a rough shape of a crown. I used a piece of fabric I had dyed in diluted Lumiere. It has a wonderful shimmer because of the metallic particles in the paint. After I had stitched down the Tyvek pieces and quilted the background, I added a little more darker blue Lumiere on some of the quilted areas, to add interest. I’ll add a photo of the whole piece once I finish it. 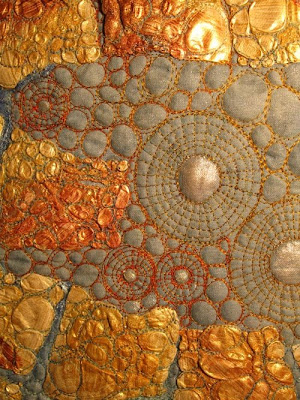 I also had fun making a necklace (below) using heavily melted Tyvek beads (they are the blue lumpy ones) with glass beads and some I made using Textiva (Angelina film) and then wrapping them in craft wire strung with glass seed beads. 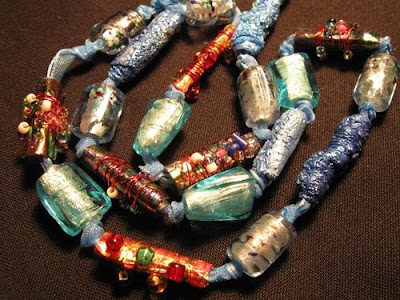 Intrigued? Sign up for my class at Joggles, and join me… we are going to have lots of fun!
Posted by Susan Brubaker Knapp at 2:01 PM 6 comments: 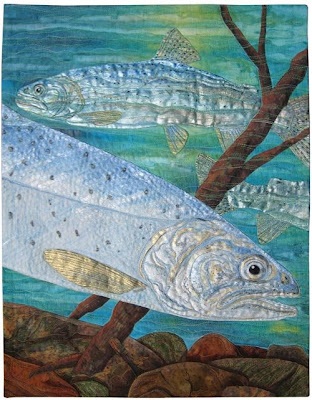 This is “Running Deep,” my entry for the Journal Quilt Project II: Elements – Earth, Water, Air, and Fire. It is one of two pieces I have exhibited at the International Quilt Festival in Houston this week. (The other is “Harbinger’s Hope,” which is in the Quilts: A World of Beauty exhibition.)

Several summers of drought where I live (near Charlotte, NC) got me thinking a lot about water… about how 45 percent to 75 percent of the human body is water … about how we are poisoning our creeks and lakes with pesticides … about battles fought between states and municipalities about who gets the water from our rivers and lakes, and how much … and about how essential clean water is to both people and animals.

Many of our native fish – like the beautiful Bear Lake cutthroat trout featured in my quilt – are threatened because of rising water temperatures, pollution and environmental degradation. Will we get our act together in time to save the trout … and ourselves?

I had two main challenges with this piece. The first was to capture the effect of light coming down through water, and the shimmer of water and scales. I chose the background fabric, which has highlights of yellow and green, because I thought it looked like sunshine falling through deep water.

I had used textile paints before, but never to such an extent as I did here. Using Jacquard and Stewart Gill paints, I painted the fish on white cotton fabric, then cut them out and hand appliqued them to the background fabric. The stones and the branches were cut from brown fabrics and appliqued down first, then painted with highlights and shadows to make them appear more three-dimensional.

The second challenge was to achieve a sense of depth. After the fish were appliqued, the two smaller fish (which were supposed to appear as if they were in the background) looked as if they were swimming with the large fish at the bottom of the piece. To solve this problem, I painted the two smaller fish a darker greenish-blue, and added a branch positioned behind the big fish and in front of the two smaller fish. I also quilted water currents over the background fish and the top part of the branch to make them appear to recede. The more detailed painting and quilted scales on the large fish also add to the impression that he is in the foreground. 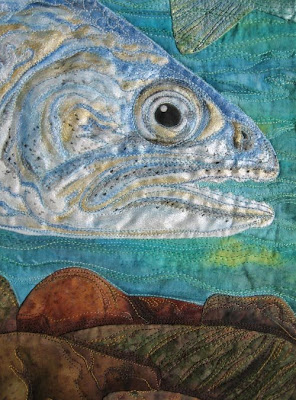 Karey Bresenhan, president of Quilts, Inc. (which organizes the International Quilt Festival), created the Journal Quilt Project several years ago “to encourage growth and to help quilt artists break out of their comfort zone and try new things.” Karey has been a great supporter of art quilters, and has given us so much visibility through this project.

The two years that I went to Houston, I got to see the Journal Quilt Project and thought it was one of the best things about Quilt Festival. This year jurors chose 48 quilts from more than 150 entries. Linda Minton, G. Armour Van Horn and Judy Smith (owner or the QuiltArt List) have come together to give the quilts that were not accepted into the exhibit this year a chance to be viewed. And they are ALL fabulous! You can see them here at Braving the Elements.

If you are lucky enough to be going to Quilt Festival in Houston this week, I would love to hear what you thought about this year’s Journal Quilt Project!
Posted by Susan Brubaker Knapp at 9:14 AM 8 comments: