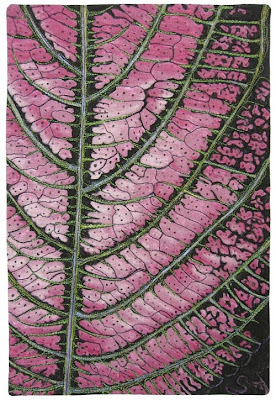 Today, I got an e-mail from Pokey Bolton, editor of Quilting Arts magazine, telling me that she had received an e-mail from a woman in Alabama who pointed out that my piece featured on Quilting Arts TV, which I had based on a photo I took at a botanical garden and identified as a coleus was not, indeed, a coleus.

Apparently it is Persian Shield, or Strobilanthes dyerianus. “This unusual plant displays bright highlights on shimmering silvery-purple to metallic mid-blue leaves,” according to the Alabama Grown website. You can see a photo of the plant here. It does look exactly like the plant I photographed, and as the woman from Plantersville, Alabama, pointed out, it is not a coleus!

So now, here’s my quandary: I’ve already named the piece “Coleus.” It is headed to the Festival of Quilts in Birmingham England as part of a SAQA exhibition this summer. Should I rename it? Is this feasible at this point? Or should I just claim artistic license and vow to be more careful in my species identification in the future?

I’m pretty certain that the coleus in my Red Coleus piece (below) actually is a coleus. Whew! 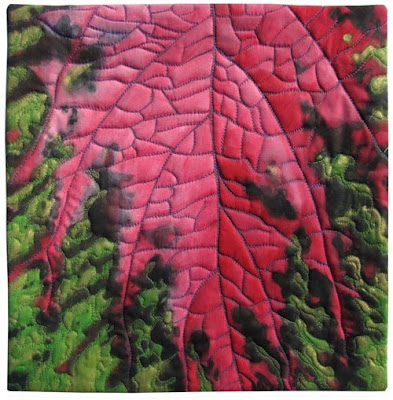 Posted by Susan Brubaker Knapp at 10:24 AM 8 comments: