Marianne Byrne-Goarin is the Aurifil Designer of the Month

Allow me to introduce you to Marianne Byrne-Goarin of The Cinnamon Patch; she is Aurifil's Designer of the Month for October.  Marianne designs the most charming projects using Aurifil’s Lana wool thread. (This thread is a wool/acrylic mix in 12 weight. I have used it in wool handwork, and it is fabulous.)
I met Marianne several years ago at International Quilt Market, when I was oooohing and aaaaahing over her beautiful designs. In person, she is as lovely – inside and out – as her projects. Marianne is Irish, but has spent most of her adult life living in France. She is married and has three sons. 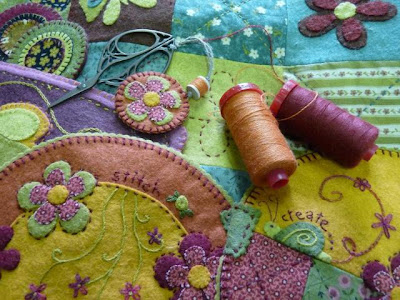 Pat Sloan has interviewed Marianne on the Aurifil blog. (You can download the pattern for her free project there, too!) 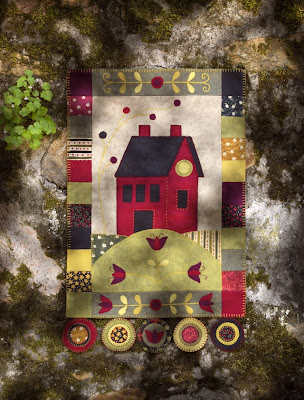 Remember if you make any project from the design team, load a photo to our Aurifil Flickr group; this puts you in the running to win an Aurifil thread prize! 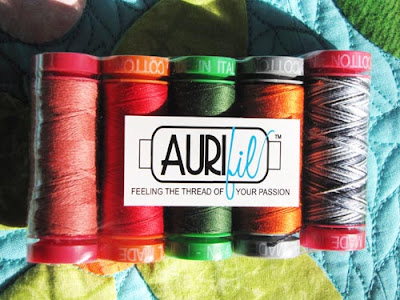 GIVEAWAY!
Each month this year, I’m going to be giving away a pack of Aurifil minispools (like the one shown above) when the new project is announced. Just leave a comment after this post telling me if you have tried working with wool in quilts or stitchery projects. I'll pull a name at random on Saturday, November 13 at noon EST. The sampler pack includes great colors in different weights. I’ll throw in a spool of Aurifil’s wool Lana thread, too!
Posted by Susan Brubaker Knapp at 9:47 PM 50 comments: 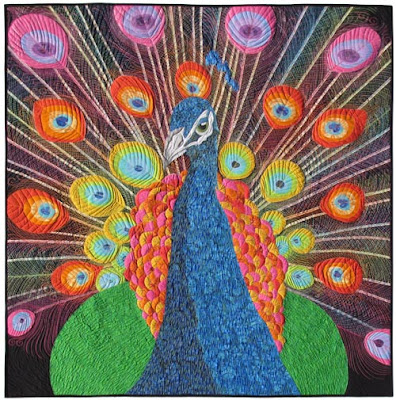 It is done! I don’t know when I’ve been happier to say that about a piece. This one was a bear. Partly because I ran out of my favorite fusible adhesive – Lite Steam-A-Seam 2 – and had to use a heavier one, and partly because I underestimated how much threadwork I’d need to do to achieve the proper look for the feathers, and partly because of the size. It is 48" square, and has my favorite stabilizer — Pellon 910 interfacing — under the whole surface. I have stitched king-sized bed quilts on my home sewing machine that have been easier to wrangle under the needle than this one was!

I estimate that I spent at least 100 hours working on this piece!


I made it to showcase collections of fabric by StudioeFabrics, a wholesale division of Fabric Editions, a company in Greenville, SC, for whom I have done design work. It will hang in their booth – with other art quilts by some fabulous fiber artists I know! — at International Quilt Market in Houston, Oct. 28-31. Fabric Editions has been in business since 1996, specializing in packaged fabrics known as “pre-cuts” and “kits” which are sold into the mass specialty markets. They offer fabric collections, pre-cuts, patterns and kits to independent fabric retailers only.

Here are some detail photos: 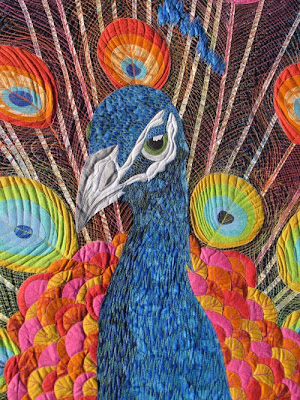 This piece is based on a photo I took this summer of a peacock of a zoo in Colorado. (See earlier posts for more information on how I started this project.) I changed the colors of the tail feathers to showcase the fabric line. After tracing my photo, and blowing up the line drawing, I created pattern pieces for each element using paper-backed fusible adhesive.

After fusing down the fabrics, I backed the quilt top with Pellon 910, and then thread-sketched the lines in the feathers using 50-weight Aurifil Cotton Mako thread. Once I added the batting and backing, I quilted the piece, going back over some of the lines in the feathers with quilting thread (mostly 40-weight Aurifil Cotton Mako) to make them stand out more. 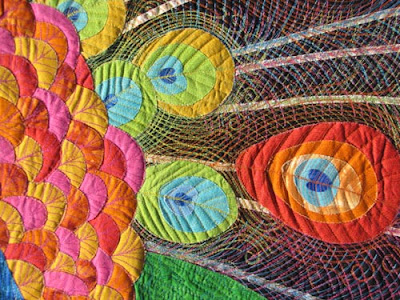 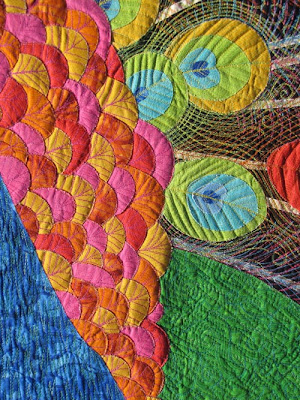 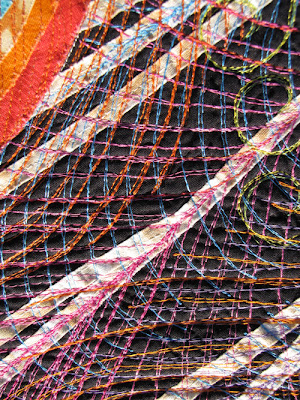 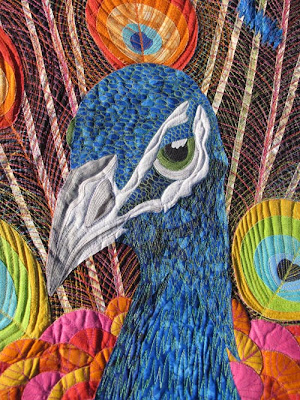