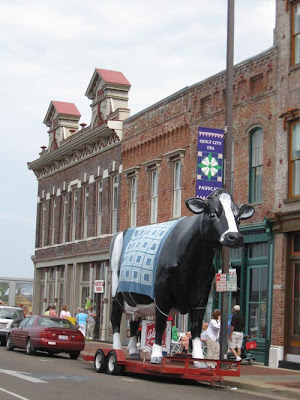 I just got home from the American Quilter’s Society’s Quilt Show & Contest in Paducah, Kentucky. Whew! What a whirlwind. My mom and I managed to see a lot in the two days were were there, had a blast, and then slipped by several tornadoes in our path on the way home last night. (More about that later.)
Paducah is a such a great town. It feels like all the townspeople are out and about helping, working, and welcoming the quilters. One told us that the show brings $8-10 million to the local economy each year. It is very charming, with boutiques, gift shops, antique stores, restaurants and galleries everywhere near the convention center where the show is held. You can tell that the economic conditions have hit the town hard, but they are fighting back. 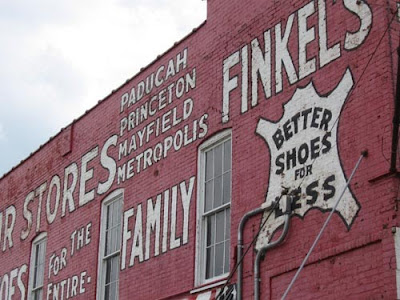 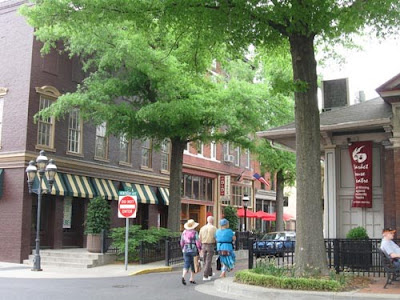 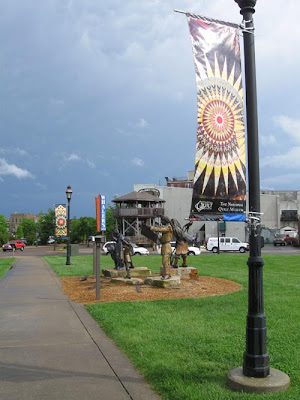 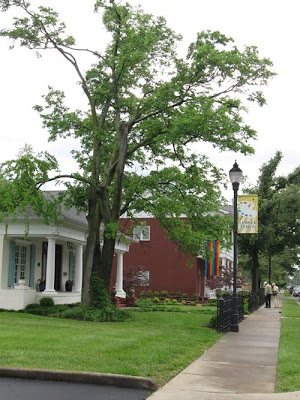 The red brick building above is Caryl Bryer Fallert’s studio. I was told by several people who live in town that the town has some generous programs to help artists who set up their studios in the historic homes in downtown, many of which still await renovation. It is already a thriving artists’ community, and I think it will continue to grow. 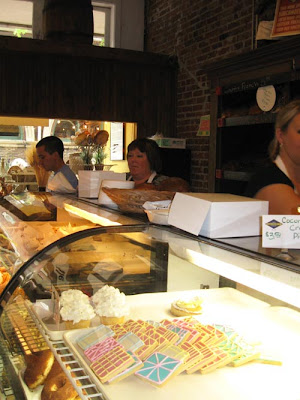 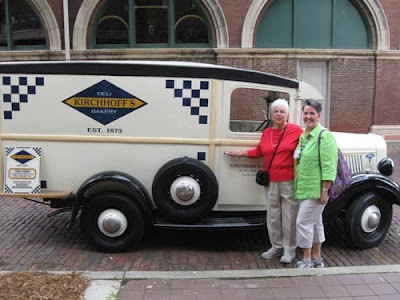 Kirchhoff’s Bakery was doing a brisk lunch business and selling lots of goodies, including cookies frosted like quilts, to all quilters attending the show. That’s my mom and me posing with their vintage delivery truck, after enjoying mocha chocolate chip cookies and sour cream scones. Mmmmm... 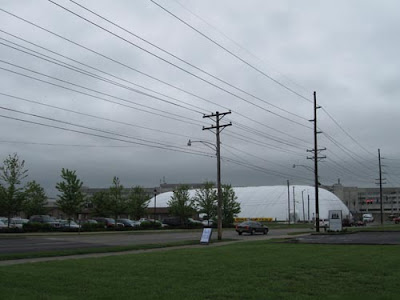 Weather was perfect on Friday, but by Friday night and Saturday morning, fierce storms had arrived. This is the same front that spawned deadly tornadoes in Mississippi. The clouds were dense and moving fast. You can see them in the photo above, which shows the tent set up to hold many of the vendors this year, since the large hotel adjacent to the convention center has been shut down for renovations.
Mom and I hit the domed tent (referred to as “the marshmallow” by many of the attendees) first thing Saturday morning, fearing that the weather would get worse and it would go airborne. We were inside when the first rash of thunder and lightning hit, so loud at times that you could barely hear anyone talk. We were assured that the tent was guaranteed to stay put in 90 mph winds. Inside, it was very spacious and cool. 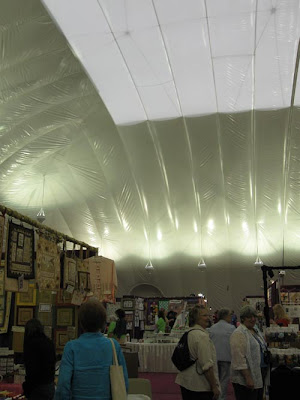 My quilt was in the main building. Even though I did not win a ribbon, I was so proud just to have gotten into the show after seeing all the exquisite entries, especially the traditional and appliqué quilts. 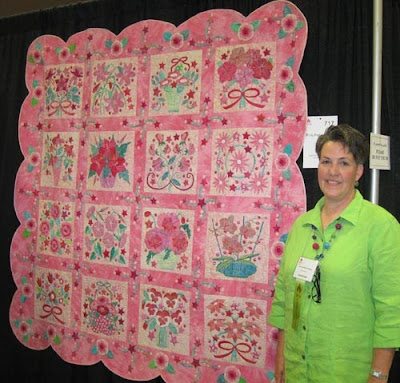 The National Quilt Museum is fabulous, and not to be missed. We were particularly moved by Hollis Chatelain’s Imagine Hope exhibition, which “strives to touch its viewers, inspiring them to get involved and make a change in the world.” It includes 12 monochromatic pieces of fiber art by Hollis, and thought-provoking photos by Michael Freeman, Edward Linsmier and Koos van der Lende. The goal is to create a public dialogue about important world issues, including the preservation of cultures, environments and natural resources. 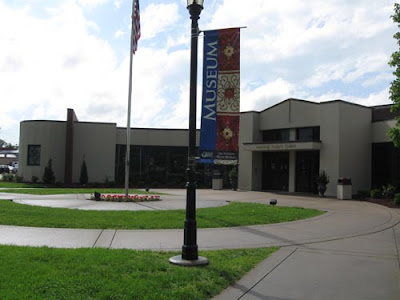 I know Pat LaPierre through Studio Art Quilt Associates (SAQA), and was pleased to finally meet her in person, demonstrating how to use a product she developed, the Supreme Free-Motion Slider, in combination with Sharon Schamber’s red Quilt Halo: 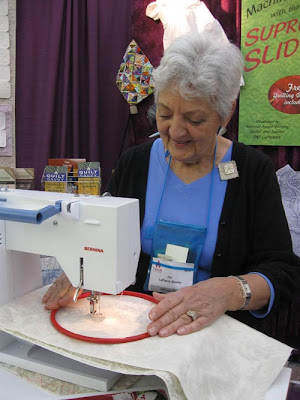 The top surface of made of Teflon. The bottom surface sticks to the bed of your machine. The result is that your quilt glides smoothly as you free-motion stitch. There’s no friction to make you tense, so you can thread sketch and quilt much more easily, and with better results. 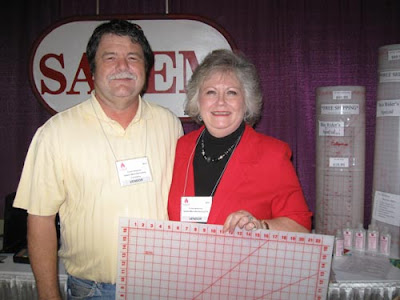 I was excited to learn about a product new to me, Salem cutting mats. I needed a new cutting mat, and was initially attracted to their display because the mats were red and white, which would match my studio better than the green cutting mat I have now.
When I asked them to tell me about their products, they told me that Salem mats do not warp in extreme temperatures, and that they are soft enough to pin into. They also flatten right out after they are rolled up for travel or storage. And they are made in the United States. I was sold! I purchased the 24 x 36" size that was already sold out, so they are shipping it to me. 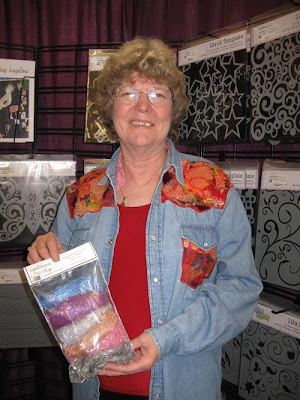 It was nice to see Betty Blais again. I took a class from her a few years ago, and learned a lot about different surface design materials. Betty is the owner of Embellishment Village, an online store that carries a wide range of products, including Angelina, foils and foiling glues, glitters, stencils (really cools ones like the ones behind her in the photo above) beads, yarns, charms and more. I stocked up on Angelina and stencils in her booth! 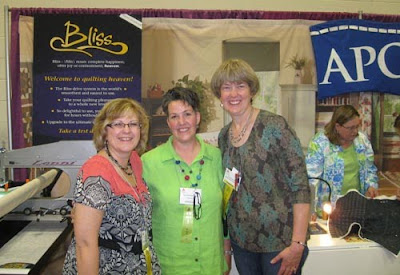 I found Pat Sloan (left) and Heidi Kaisland, the national sales manager for American Professional Quilting Systems (APQS) (right) in the APQS booth, and drooled over their wonderful longarm machines. It is such fun to meet up with people I’ve gotten to know through their blogs, websites and Facebook pages.
By Saturday afternoon, Mom and I were completely exhausted, and had decided to call it a day. We headed for home. 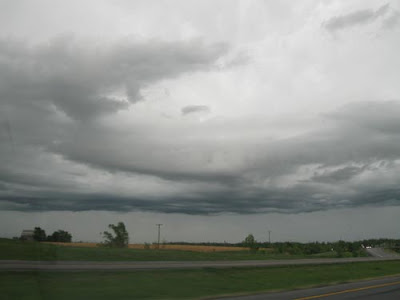 About an hour outside Nashville, the skies starting looking pretty ominous, with a heavy ceiling of unusual looking dark gray clouds moving at an alarming rate. We stopped for dinner and considered stopping overnight at a hotel before proceeding home, but in the end, decided that was not such a great choice, either. The storms were still coming through.
We kept going, drove through some greenish skies, then heavy wind and pounding rain in the dark, for about two hours, and came out on the other side, where the winds were high but things were generally better. We got to my parents’ house near Knoxville by about midnight, white knuckled and very stressed, but safe.
Posted by Susan Brubaker Knapp at 5:51 PM 16 comments: