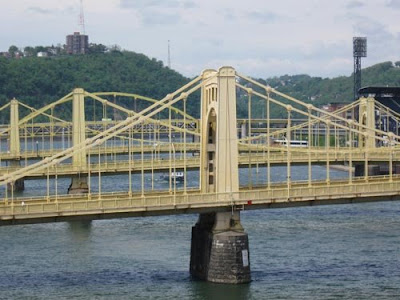 I had planned to blog and post photos and video from Quilt Market, but alas, it was not meant to be. No internet access in my hotel room, and I was running around from 7 a.m. until 10 p.m. every day. Now I’m back at home, but there is so much to tell that I’ve decided to post it in chunks. Here’s today’s installment:

For those who don’t know about Quilt Market, it is a trade show (not open to the public) for everyone who makes a living through quilting: fabric companies and designers, pattern designers, book publishers and authors, magazine companies, thread companies, and anyone who makes and sells stuff to quilters. It is organized by Quilts, Inc., the same folks who bring us International Quilt Festival and its sister shows. Every fall, it is held right before International Quilt Festival in Houston. Every spring, it is held in a different U.S. city. This year it was in Pittsburgh, Pennsylvania.

I am a proud Pittsburgh native, and it was wonderful to see my hometown again! I have not lived in the Burgh since 1985. A lot of the steel mills are gone, and while it is very sad to think of all the industry and jobs that have departed, Pittsburgh is re-inventing itself, and there are many new commercial buildings and condos lining the riverbanks where the steel mills used to stand.

The David L. Lawrence Convention Center is very impressive, with clean, modern architecture and skylights that beautifully illuminate the convention exhibition hall with natural light. Large windows on the exterior look out on historic structures and new buildings. 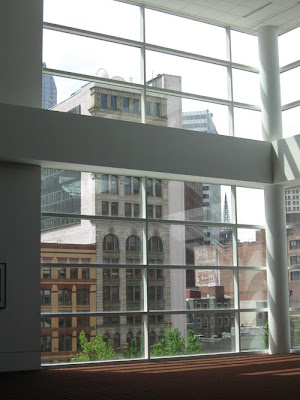 On the ground floor, a road runs right through the center, below the exhibition hall. There’s a beautiful fountain flowing down the middle, echoing the three rivers that flow through Pittsburgh. 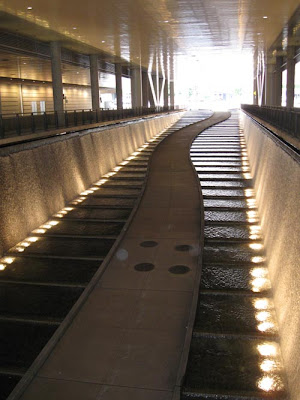 These great little shuttle buses schlepped Market-goers from hotels to the convention center. They are modeled after the trolleys my dad used to take from our home in Mt. Lebanon, a southern suburb, to his workplace downtown. Remember the trolley from Mister Roger’s Neighborhood? Ding, ding! Mister Roger’s was a Presbyterian minister, and his show was created and filmed in Pittsburgh. I actually got to meet and sit in his lap when I was a very young child. I’m still a fan today. 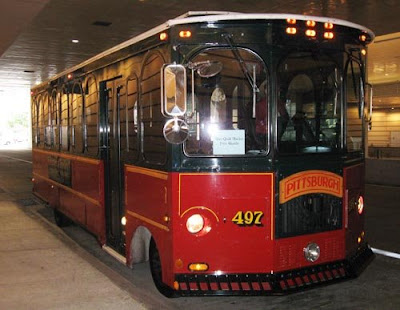 Thursday is very busy with the “Schoolhouse Series,” where you can learn about new products and hear from designers, industry leaders and book authors on a range of topics. Lots of things are offered simultaneously and you get to pick where you want to go. Lots of great little give-aways, too! Here’s a shot of the crowd charging toward their next session: 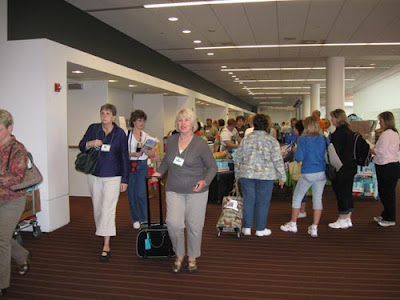 My friend, fellow fiber artist, and traveling companion Janet A. Lasher was excited to discover her gorgeous Bernina Fashion Show garment on display (they rotated new ones in each day). It is the rust-colored one with the embellished bodice, directly behind her. There were several exhibits from the International Quilt Association on display at the center of the convention center floor, and it was nice to take a breather from the hustle and bustle of commerce and visit them every now and then. 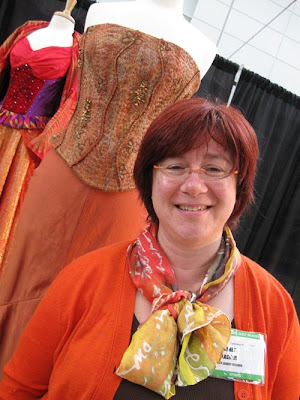 Nothing but Heinz (a Pittsburgh company) for condiment choices inside the convention center! 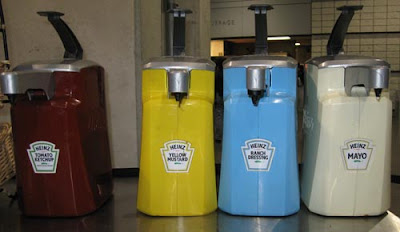 On the top level, there is a walkway that connects the two sides of the convention center. Here’s the view in one direction on Thursday, during set-up, when only exhibitors are permitted inside: 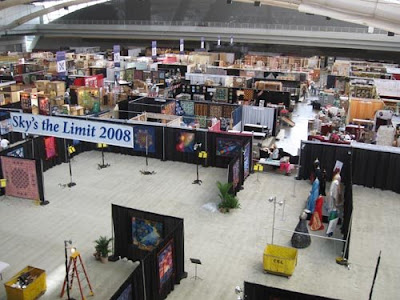 And here is a shot looking the other way (needless to say, it is a bit overwhelming, and you had to wear sensible walking shoes!): 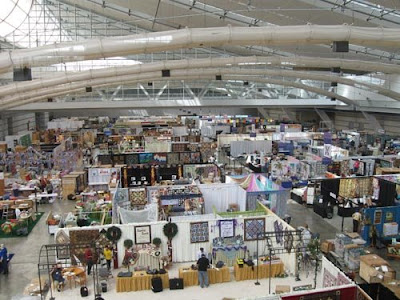 My “Bohemian Bouquet” pattern was displayed in the Moda booth. I had been hand quilting like a fiend for several weeks beforehand, but it still wasn’t completely done! 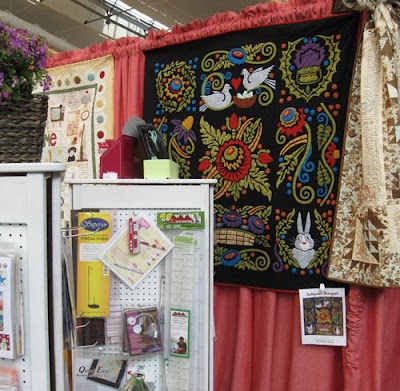 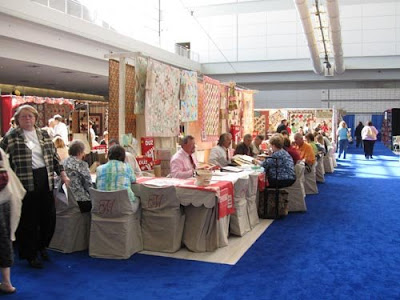 Here’s the warm and helpful crew in the Aurifil thread booth (from left:) Davide Moro, Alex Veronelli, and Elena Gregotti. Somehow I managed to get Alex with his eyes shut in both the photos I took! (Sorry, Alex!) 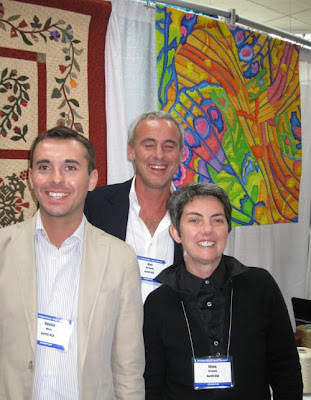 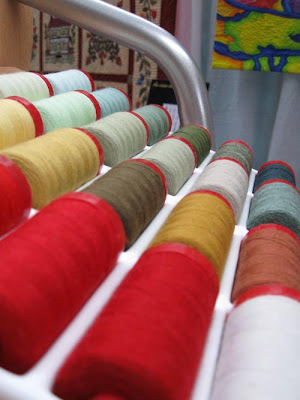 My quilt “Lepidoptera” was hung front and center in the Aurifil booth. Aurifil has the most beautiful display racks; they are like works of modern art. 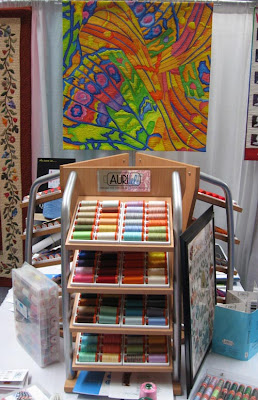 At Schoolhouse, Janet and I were walking past a room and saw a gigantic pile of tote bags waiting for the Andover attendees. I spotted Loni Rossi’s fabric right away and was commenting on how much I love her stuff when I heard a voice say “Thank you!” right behind me, and it was her! 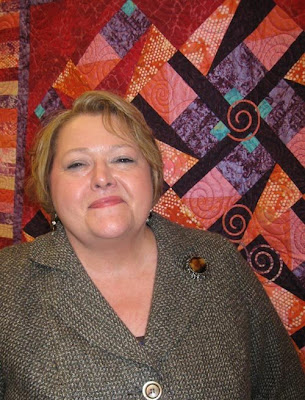 Loni has had a line of Geisha quilt designs out for a while, but is launching a smaller size panel with three smaller Geishas on it. They come as black line drawings on white fabric, and you apply fused fabric on top. Beautiful! 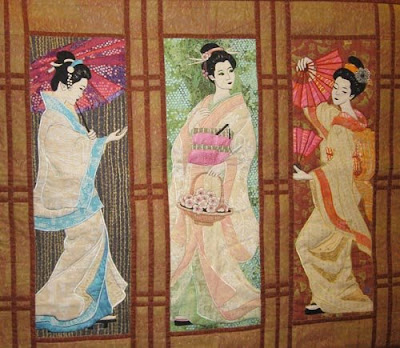 Susan Nelson (left) is a quilt pattern designer and owner of Prairie Sky Quilting. Many of her patterns feature a very cool technique she calls “Fun and done!” Her friend, Shelli Ricci from Apple Valley MN, (right) is Miss September in the 2010 Quilting Arts calendar with her piece called “The Garden of Eva.” 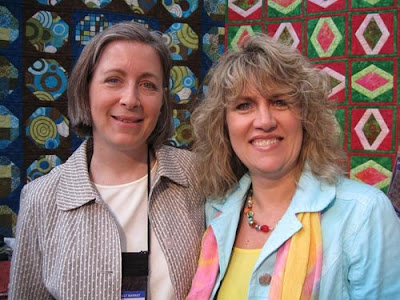 Kay Mackenzie (left, below) is the author of Easy Applique Blocks, which came out this spring. Kathy Mack (center, below) is a pattern designer who has authored several things for Quilting Arts Gifts magazine. She is also the owner of Pink Chalk Studio, a neato-keeno online quilting store. This is the second spring Market where I’ve met up with Kathy, but the first time I’d met Kay face to face. It is amazing how FaceBook and Twitter and other social networking sites and Yahoo groups have changed the way quilt designers are interacting. 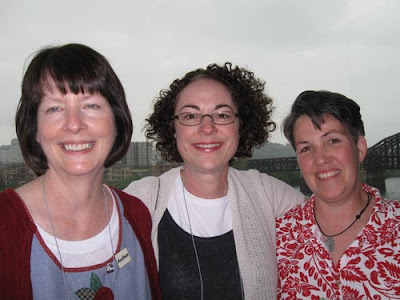 Iris Karp was demonstrating how to use Mistyfuse, a fabulous lightweight fusible product: 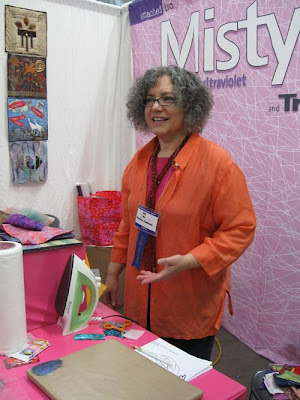 Janet and I met with Bonnie McCaffery (center) on Sunday morning to be videotaped for a VidCast she will feature on her website later this year. Bonnie got me started in art quilting in 2005, when I took her “Painted Faces” workshop, and I owe her a huge debt of gratitude. (I had been doing only traditional quilting until then, and taking her class really changed my life.) Bonnie is a busy author and teacher, but she also works as a videographer, producing DVDs for other quilters. 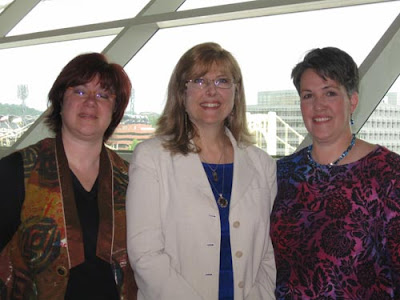 Cheep, cheep!! P&B Textiles had the cutest fabric birds everywhere in their booth, all made from some of their wonderful new fabric lines. I got to bring one home with me. I really enjoy looking at all the creative displays and merchandising at Market. They give out awards and ribbons for the best booths, and I witnessed one excited designer finding out she had won when Karey Bresenhan (president of Quilts, Inc.) presented it to her. 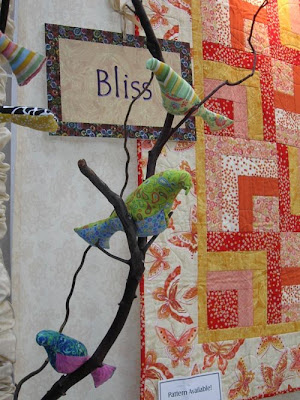 Make sure to check back tomorrow, because there is lots more to come!
Posted by Susan Brubaker Knapp at 7:46 PM 10 comments: 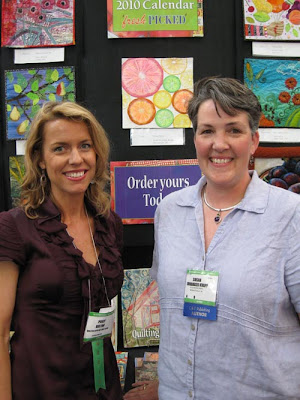 I was at Quilt Market last week and found out there that two of my pieces will be featured in the 2010 Quilting Arts calendar! I’m on the cover and October. Pokey Bolton, the editor of Quilting Arts, made the announcement today on her blog, with a video shot at Market (by my friend and fellow fiber artist, Janet Lasher).