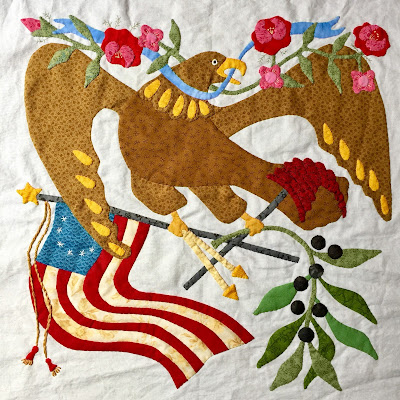 I’ve just started Susan Garman’s “Friends of Baltimore” pattern. Here’s my first block! I’ve always wanted to do a Baltimore Album quilt, and I’m finding that intricate handwork is a great stress reliever. I was recently diagnosed with osteoarthritis, and I don’t know how long I’ll be able to do this kind of work, so I figured I better start now if I want to complete a quilt like this in my lifetime.

Baltimore Album quilts are a style that originated in Baltimore, Maryland, around 1840. Each block is intricate and different, and most feature flowers; buildings, ships and bouquets. Many of these quilts were signed, using ink, and embellished with embroidery. These were not common bed quilts. They were highly prized family heirlooms, and were carefully preserved, so a fair number of examples survive today.

In Susan Garman’s design, the eagle holds an American flag (I embroidered my stars in the circular Colonial formation), and an olive branch and arrows, symbolizing America’s desire for peace but readiness for war. In his beak, he holds a spray of wild red roses, the national flower. He also holds in his talons a “Liberty Pole” topped with a red “Liberty Cap.” I was not familiar with the Liberty Pole until a few years ago, when researching my genealogy. I discovered that I am a descendant of Robert Philson (my fourth great grandfather), who was arrested after protesting taxes on whiskey during the Whiskey Rebellion. Here’s information about him from Wikipedia:


Robert Philson (c. 1759 – July 25, 1831) was an Irish-American soldier and politician.
Philson was born in County Donegal, Ulster, Ireland, and immigrated to Pennsylvania with his uncle John Fletcher. They kept a store in Berlin, Bedford County, Pennsylvania.
In 1794, Philson was arrested for his involvement in the Whiskey Rebellion. He was sent to Philadelphia for trial, but he and his co-defendant, Herman Husband, were acquitted.[1]
Philson served as associate judge of Somerset County, Pennsylvania, for twenty years, and also served as a one-term congressman during the 16th United States Congress.
Philson was commissioned a brigadier general of the Second Brigade, Tenth Division, Pennsylvania militia on May 9, 1800. During the War of 1812, he served as a brigadier general of the Second Brigade, Twelfth Division, Pennsylvania Volunteers.

The Liberty Pole was used as a symbol of freedom during the American Revolutionary war, and was later used as a protest against federal taxes on whiskey during the Whiskey Rebellion. It was erected in towns across the thirteen colonies, and often topped with a Liberty Cap, which dates to the 4th century BC! It was used as a symbol during the French and American Revolutions, and starting in the 1790s, was used on U.S. coins, which featured Columbia/Liberty wearing the cap. It is usually portrayed as a red knit hat. (The pussyhat is an echo of this symbol!)

A note: Susan Garman died in January 2017; this was such a loss for the quilting community. Many of her patterns are available here: https://www.comequilt.com