A lovely link to the past 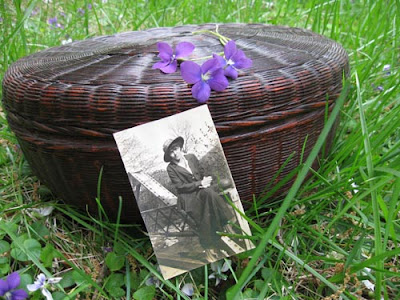 This is my grandmother Helen McDanel Brubaker’s sewing basket. That’s a photo of her, about 1918, with it. I never got to meet Helen, as she died before I was born. Last week, when I was in Colorado Springs to shoot The Quilt Show, my cousin Carole gave it to me.
I was so happy to have it, as I have very few of Helen’s things (because of a long and sad story I will not share with you here that involves my step-grandmother). How nice to feel that link, through needle and thread, to her.
I had not seen Carole since the death of our grandfather in 1978, when I was 14! We passed a few hours examining each other’s faces for the Brubaker family resemblance, eating lunch and talking about the work Carole has been doing on our shared Brubaker genealogy.

Here’s something fun she discovered: One of our great-great-great-great-great grandfathers was Robert Philson, born in 1759 in northern Ireland (most likely his ancestors came from Scotland). He came to America with his uncle, and they kept a store in Berlin, Bedford County, Pennsylvania.

In 1794, Philson was arrested for his involvement in the Whiskey Rebellion, an uprising of farmers protesting a tax on whiskey by the fledgling U.S. government. At that time, rye was widely grown, and apparently it was more profitable to make it into whiskey than to transport the grain itself. One of the reasons that the Whiskey Rebellion is considered important in American history is because it helped to define one of the basic principals of our democracy: that a citizen could disagree with his or her government and not have it considered an act of treason.