This week, I started work on one of the pieces I am doing for Fiber Art Options’ exhibition called “Meadowood Stitched,” which will premiere this fall at Daniel Stowe Botanical Garden near Charlotte. All the pieces will be based on meadow life, to celebrate the opening of a new section of the garden that includes meadow and woodland.
I am calling this piece “Synchronized Synchronous Fireflies.”
“What the heck does that mean?” I can hear you all thinking.
Well, synchronous fireflies are a phenomenon that you can only observe in two places in the entire world – the Great Smoky Mountains in Tennessee, and Southeast Asia. The Smokies are only about four hours from where I live. My mother told me about this phenomena demonstrated by the species Photinus carolinus, and she went to see it in the Smokies, but my family has not made the trip yet.
According to a website for Gatlinburg, Tennessee, “This species of fireflies has an internal sensor that lets them know when a nearby firefly has lit, in which they respond with their own light as quickly as possible. It may take a minute for them to get in sync, but all of a sudden that start performing together with flashes that last as long as six seconds. This, in turn, presents an amazing wave of blinking lights that is truly astonishing.” You can watch a video about these fireflies here. 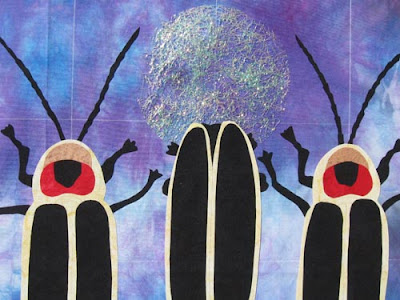 The name made me think about synchronized swimming, which in turn made me think about cute little beetles lined up in the night sky in perfect formation, like the synchronized swimmers in the Olympics, firing up their little green lights at just the perfect moment in an outstanding example of simultaneous bioluminescence, tiny swim caps on their heads. Okay, maybe without the swim caps.
So I made five little fireflies and arranged them in a position reminiscent of the synchronized swimmers. Their lights are made of Angelina fiber that reflects the light and gives them their signature glow. The fabric is a piece I hand-dyed last summer; I picked it because it reminded me of twilight, the gloaming – the time between twilight and dark. 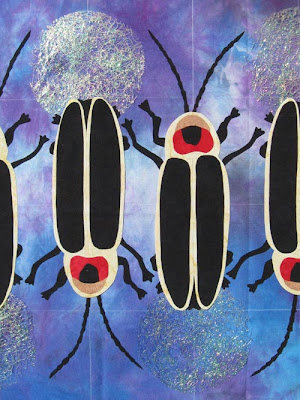 As a child, I spent many a summer evening in Pennsylvania with friends, chasing and catching lightening bugs (another name for fireflies) and putting them in Mason jar to make a lantern. It was magic. I didn’t realize until recently that there are no fireflies in the western United States. My husband had them in Oklahoma, but when I took a class with California artist Jane LaFazio when she came to North Carolina last June, she was all abuzz because she had seen fireflies the night before. Apparently they don’t have them in Europe, either. How sad!
What’s next for this piece? I’m going to add some grass coming in on either side. The finished size needs to be 24" square. I think it will be very orderly grass, to emphasize the very orderly nature of the insects. And then I will thread sketch the fireflies, and quilt it. I’ll post more photos as it progresses.
Posted by Susan Brubaker Knapp at 5:43 PM 3 comments: