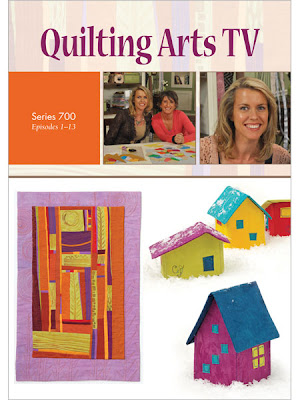 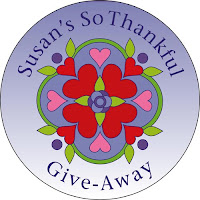 Today, I’m giving away the Quilting Arts TV Series 700 DVD! This is a four-DVD set that includes all the episodes for an entire season of Quilting Arts TV with host Pokey Bolton. (I’m in three of the episodes in the 700 series, which started airing on public television stations in the U.S. last fall.) It retails for $39.
Guests on these shows include Deidre Adams, Shelley Brenner Baird, Julie Fei-Fan Balzer, Mary Jane Butler, Malka Dubrawsky, Jamie Fingal, Victoria Gertenbach, Dianne Giancola, Candy Glendening, Kerr Grabowski, Mary Hettmansperger, Leslie Tucker Jenison, Susan Brubaker Knapp, Jeannie Palmer Moore, Judy Coates Perez, Beryl Taylor, Jean Wells, Valori Wells, and others.
Psssst! Notice those cute little houses on the cover of the DVD set? They are the work of Candy Glendening, whom I featured in yesterday’s giveaway. There’s a chance to win her DVD in that post.
Here’s your chance to win! Leave a comment after this post and tell me why you like Quilting Arts magazine or Quilting Arts TV, or about a technique you’ve learned from them. (And if you haven't looked at either, what the heck are you waiting for?) I’ll pull one name at random at 9 p.m. on Tuesday Nov. 22, and send you the DVD set. We have a winner! Cornwoman has won the set of DVDs.
Posted by Susan Brubaker Knapp at 11:54 AM 81 comments:

Big news flash!
I will be teaching at the first ever International Quilt Convention–Africa in Johannesburg, South Africa next year! The event will take place July 27-29, 2012 at the luxurious Emperors Palace resort. I am so excited to be taking part in this convention; it will be wonderful to meet African quilters, and to see a bit of their beautiful country.
The convention will feature exciting quilting and fiber art workshops by popular South African teachers, as well as these international teachers:
The organizers have already lined up a impressive group of sponsors, and there will be a large vendor hall and exhibitions from selected international and local quilters. I’ll be teaching three classes:
Here’s a little video clip I made for the organizers of the show to use in their promotion of the event:

Posted by Susan Brubaker Knapp at 10:31 AM 8 comments: