I’ve been working on a new piece, “Witch Hazel,” based on a photo I took at the N.C. Botanical Garden in Chapel Hill. It is done now, except for the facing. This piece will be part of my exhibition “Native Plants in Fabric and Thread” at the Garden in March-April 2022.
When the witch hazel was at its peak in mid-November, I took lots of photos of it, and chose my favorite shot. I decided to change the background to give the crazy bad-hair-day blooms more contrast. 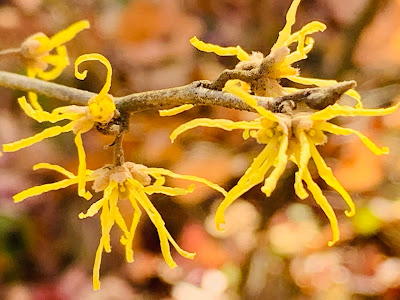 Here’s a photo of the start of the painting. I purposely left some white showing on the yellow strands of the flowers, for more of a water color look. 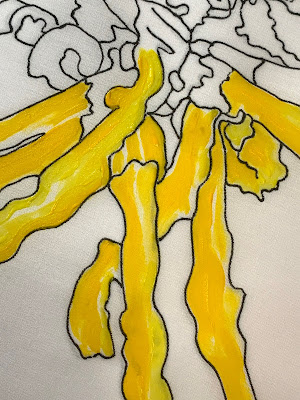 And here’s a detail shot of the finished piece: 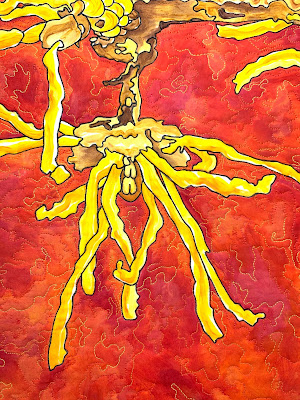 Hamamelis virginiana (Witch Hazel) is a species of flowering shrub native to eastern North America, from Nova Scotia west to Minnesota, and south to central Florida to eastern Texas.

The information below is from Larry Stritch of the U.S. Forest Service:

American witchhazel posses some interesting lore and uses. The most interesting use as been the use of forked limbs as dowsing or divining rods. Early European settles observed Native Americans using American witchhazel to find underground sources of water. This activity is probably where the common name witchhazel came from. “Wicke” is the Middle English for “lively’ and “wych” is from the Anglo-Saxon word for “bend.” American witchhazel was probably called a Wicke Hazel by early white settlers because the dowsing end of the forked branch would bend when underground water was detected by the dowser. This practice had a widespread use by American settlers and then exported back to Europe. Dowsing became an established feature of well-digging into the 20th century.

Native Americans produced witch hazel extract by boiling the stems of the shrub and producing a decoction, which was used to treat swellings, inflammations, and tumors.[6] Early Puritan settlers in New England adopted this remedy from the natives, and its use became widely established in the United States.[7]

An extract of the plant is used in the astringent witch hazel.

H. virginiana produces a specific kind of tannins called hamamelitannins. One of those substances displays a specific cytotoxic activity against colon cancer cells.[8]

The bark and leaves were used by Native Americans in the treatment of external inflammations. Pond's Extract was a popular distillation of the bark in dilute alcohol.

Posted by Susan Brubaker Knapp at 1:37 PM No comments: