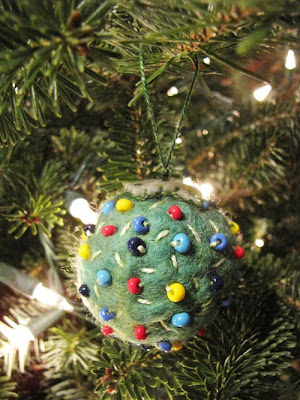 I love the work of Judy Coates Perez. And her blog is really fantastic. Not only is it beautiful to look at, but she has all sorts of fabulous tutorials, and is so generous in providing instructions. Today I whipped up this cute little ornament using the Felted Wool Ornament tutorial on her blog. Give it a try. It is really fun and easy. I’m going to make some of these with my kids and my nieces when they visit later this week. 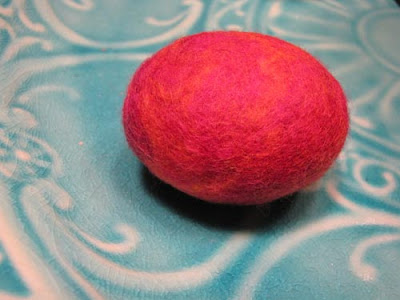 I have not embellished this little beauty yet. Doesn’t it look glorious against that aqua plate?
Posted by Susan Brubaker Knapp at 6:30 PM 2 comments:

A new coat for my Bernina 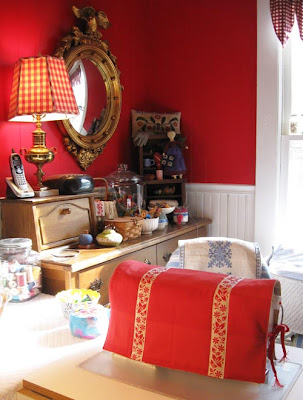 I don’t know what it’s been like where you live, but we have had quite a chilly December so far here in North Carolina. Our average daily temperatures are usually above freezing during the day in December, but we have had a month of mostly freezing temps and even a few days of snow. It was enough to make my sewing machine (a Bernina Virtuosa 153 QE) shiver! So I decided to stitch her a little coat. To keep her warm for now, and to keep the dust off her for later. (Dust? Yeah, like that’s a problem… barely a day goes by without me sewing something!) But it looks cute, too. 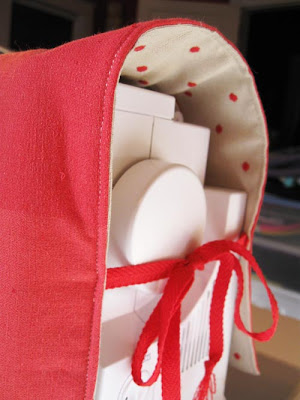 It is basically two fat quarters of fabric (these are both French General fabrics from a year ago, and I think they are “toweling” – heavier and coarser cotton, or perhaps cotton/linen fabrics). I measured my machine (side, top, and down the other side; and the length) and then trimmed the fat quarters to that size plus seam allowances. Then I cut batting the size I wanted the finished cover to be, and basted it to the wrong side of one of the fabric pieces.
I placed the fabric pieces right sides together and stitched around the perimeter, leaving a 4" opening so I could turn it right side out. After clipping the corners, I turned it right side out, pushed out the corners, and removed the basting stitches. I pressed under the fabric at the opening, and then top stitched around the outside edge. I added pretty ribbon ties on both sides (you can see them above). 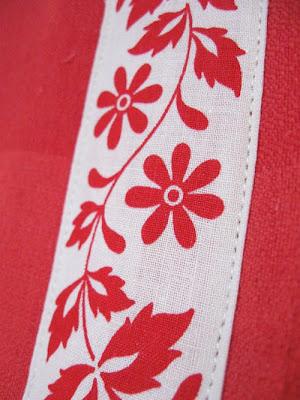 Then I dressed it up a bit by adding some beautiful old ribbon I bought from a friend. (I bought a bunch of old lace and tatting from her, and I’ll try to post about it and show it to you in the next week or so.) I think my machine looks quite fetching in her new coat, don’t you?
Posted by Susan Brubaker Knapp at 11:42 AM 10 comments: