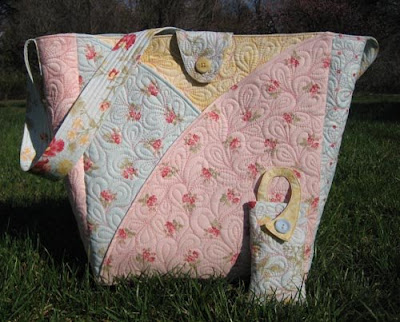 Here is my newest creation, the Tulip Bag! I used the Simplicity fabric line by 3 Sisters for Moda. The bag is 14" high, and is lined, with lots of pockets inside. I'm going to use mine as a purse, but it is big enough to use for a tote if you prefer. The front also has a large pocket perfect for your keys, so they don’t get lost inside.

There’s a Bag-E-Bottoms acrylic base (size D) in the bottom, so it sits flat and doesn’t tip over. (If you don’t know about Bag-E-Bottoms’ great products, visit www.bag-e-bottoms.com.) I use them in all my fabric bags, and they are fabulous!

The Tulip Bag pattern will also include directions for the little cell phone carrier, which can loop around the purse strap (there’s Velcro under the button on the front, so it’s easy to attach and detach it).

The pattern will be available on my website, www.bluemoonriver.com, by the end of March.
Posted by Susan Brubaker Knapp at 5:06 PM 1 comment:

So did you see "Sunday Morning" on CBS today? They did a segment on the International Quilt Festival, and interviewed Karey Bresenhan, the director of the festival, and Ricky Tims.

There was only a short bit from the indomitable Bresenahn, one of quilting’s grande dames, and a kind, generous and amazing woman. Too bad. Most of the segment focused on Ricky Tims in his Colorado studio, and footage of him meeting and greeting and teaching at Festival. He did a good job of explaining how quilting is changing, and Karey pointed out that quilting is nearly a 4 billion dollar industry annually. Plus nice footage of the festival, and of the gorgeous quilts, both traditional and contemporary. 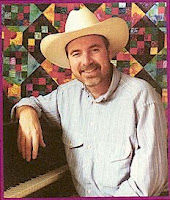 There was some of the same old, ”Wow! These quilts don’t look anything like what grandma used to make!” which I suppose is to be expected. Overall, it was a great segment that I think will interest many and open some eyes. All good things for quilting!

I do have to admit that the feminist in me was a bit put off that CBS found one of the handful of prominent quilters who are male to feature. I take pride that it is primarily woman who have taken quilting from craft to fine art, whether they make traditional quilts or art quilts.

Don't get me wrong... I think it is fabulous that men are quilting, too. The more, the merrier! And as a journalist, I recognize that a man who wins awards for quilting is more newsworthy than a woman who does, because he is more rare. But gosh, they didn't even use Hollis Chatelain's name when they talked about and showed her "Hope for our World,” which won Best of Show and $10,000 in Festival 2007! Ouch!
Posted by Susan Brubaker Knapp at 11:18 AM 1 comment: