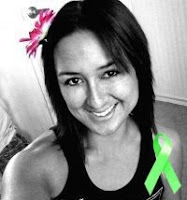 This is Nani Lauriano Luculescu, a.k.a. The Victorious Vixen (don’t you love that!). She’s a crafter I met online who is on a crusade to educate people about Lyme Disease, and to help fund a cure. Her dad has Lyme Disease, so this is personal.
It’s personal for me, too, because my 12-year-old niece, Grace, has Lyme Disease. She was diagnosed last fall. She had a rash, but it wasn’t the typical Lyme bulls-eye rash, and her nurse practitioner brushed off my brother and sister-in-law’s request for a test and poo-pooed their legitimate questions. She said we didn’t have Lyme in North Carolina. She was wrong.
A few months later Grace was in the hospital for more than four days with infected knees. The doctors there thought she had a staph infection, because her white blood cell count was off the charts. They did emergency surgery to drain the fluid. But after four days, the cultures grew still grew nothing, and my brother and sister-in-law demanded a Lyme test. Grace’s doctor still said it was unnecessary. The test came back positive for stage 3 Lyme, with 8 positive bands. Grace’s case caused Wake County, N.C., to declare epidemic levels for Lyme. This should make Raleigh area doctors more aware of the situation, and more likely to test for Lyme if there is any suspicion of it at all.

If the nurse had tested her, or put her on antibiotics when they first went in about the rash and requested a Lyme test, it might have made a big difference. It took months for her to recover from the symptoms and the knee infection, but Grace is doing well right now. But Lyme is a serious disease that can affect people for a lifetime. And most people know so little about how to protect themselves.
That’s why a group called Lymenaide has produced these public service announcements:

Volunteers like Nani have been sending Lymenaide press kits to TV stations across North America, so I hope you’ll be seeing this PSA soon on your local stations.

To draw attention to this campaign, Nani is giving away one of her fabulous handmade wallets. This is the last in her Red, Black & White Optical Delusion wallet series:


Isn’t it fabulous? On Nani’s blog, you can see other PSAs, learn more about Lyme Disease, and leave a comment for a chance to win. You need to do it by 11:59 p.m. on Friday, June 18. Just follow the instructions in Nani’s post.
Please … do it for Grace.
Posted by Susan Brubaker Knapp at 8:05 PM 8 comments: