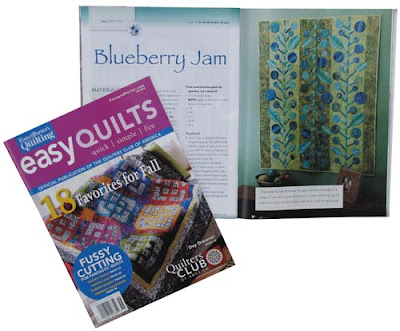 The pattern for my Blueberry Jam quilt is included in the Fall 2010 issue of Fons & Porter’s Easy Quilts magazine, which will be on newsstands in early August. 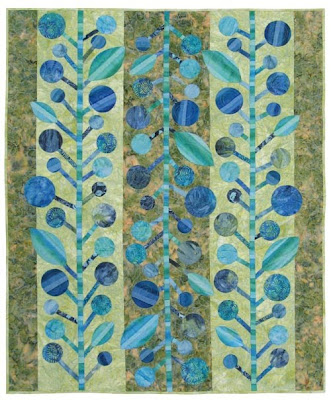 All the fabrics are Bernartex batiks (and if you want a fabric kit with the same fabrics I used, you can order one now on the Fons & Porter website here). I designed the quilt with big circles and leaves, so it’s easy to appliqué smooth curves and sharp points. Or you can make it using a fusible appliqué technique. 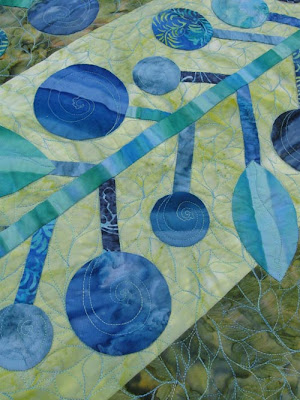 I quilted my quilt with big swirls on the blueberries, curvy veins on the leaves, and an overall leaf pattern in the background. 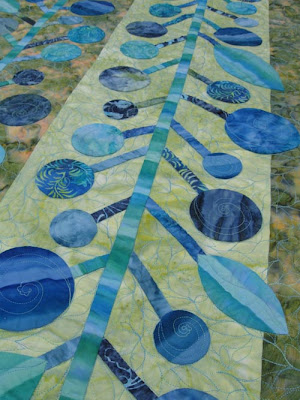 These blues and greens are my favorite colors! This quilt was inspired by a trip to a blueberry farm near my parents’ home in Tennessee. Blueberry Jam is 43-1/4" x 52", but wouldn’t it look smashing in a bed sized quilt?
Posted by Susan Brubaker Knapp at 10:13 PM 4 comments:

Quilts, Inc. (the company that does Quilt Festivals in Houston, Long Beach, and – next year – Cincinnati, as well as two Quilt Markets annually) and Quilters Newsletter magazine has just released data about the quilting industry from its Quilting In America 2010 research study. The extensive, detailed report will be available sometime in August.
What did the research find?
For more information, you can download this PDF that recaps the research’s basic findings.
The research was conducted by TNS Global, Inc., and DP Research Solutions.
Posted by Susan Brubaker Knapp at 3:34 PM 1 comment: 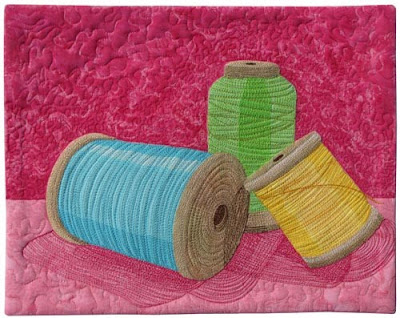 This is one of the two pieces I made for the current (August/September issue) of Quilting Arts magazine.  My article is on adding dimension using thread. I started out with a background of pale pink, then fused the spools down, and thread sketched the spools and the shadows, using a crosshatching technique (stitching in several directions to build up the darkness/value of the shadows): 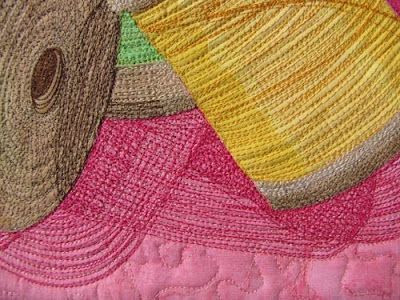 The thread on the spools was constructed with fused pieces of fabric in the same color, but different values before I stitched real thread on top: 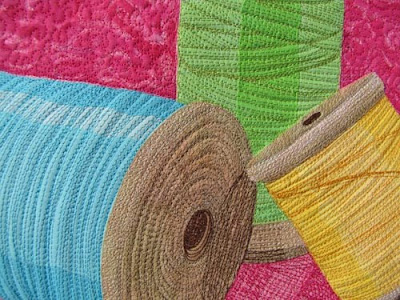 Once I was done, I realized that I needed to establish a horizon line, because it looked like the spools were floating in space, so I painted the upper part of the background a darker pink, using acrylic paint.

If you like this piece and would like to stitch one of your own, you can get my line drawing pattern on the Quilting Arts website. Just join the Quilting Arts community (for free) and go to “Free Stuff” and then the “Online Extras” section. There you will find several of my free patterns for pieces I’ve done for my thread sketching articles. 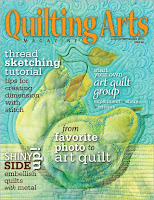 And of course, pick up a copy of the August/September issue of Quilting Arts magazine for lots more information on adding dimension to your work with thread sketching. It should be on newsstands soon, and on its way to subscribers’ mailboxes now. Or you can purchase it on the Quilting Arts/Interweave website.
Posted by Susan Brubaker Knapp at 8:53 AM 5 comments: