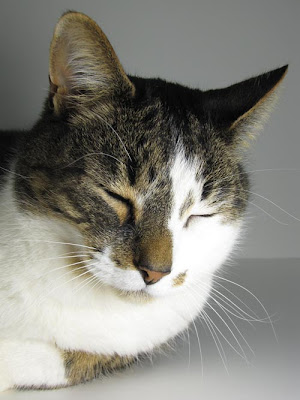 Our beloved cat Max was hit and killed by a car on Monday, while we were away visiting my parents. Since then, I’ve been breaking down into sobs every few hours. Max was an amazing creature, a very special cat, and his death came far too soon.

If you’ve followed my blog for a while, you already knew Max. He was always doing funny and silly things, begging to be photographed; you can see some of these photos in this post, and a video of him taking pins out of my pincushion here. Most recently, I featured him in this piece I made for Quilting Arts magazine.

My husband, Rob, is a gifted, eloquent writer, and yesterday, he penned this tribute to Max for our local paper, The Mooresville Tribune:

He barreled into our lives eight years ago as an impossibly blue-eyed kitten, brought to our front door by a solemn-faced neighbor girl whose pitch was more a threat than an offer. “If you don’t want him,” she said mournfully, “I'm going to have to take him to the shelter.”
And so we wanted him. Our oldest daughter was going into kindergarten, and we decided she was ready for a pet. She named him Max.
His fur was a mix of black, gray and white — stripes and solids — that gave his face a distinctive, serious look, but he had touches of golden brown that added warmth. He grew into a strikingly handsome cat, and we called him our Beautiful Boy.
Max never doubted it, either. His confidence in himself seemed unshakable. He did not hide beneath furniture, run from strangers or shy away from direct eye contact. He never walked into a room that he didn’t immediately own. We liked to joke that “Max” was short for “maximum” because he had the maximum amount of personality that you could cram into a cat.
When Max lay on our daughter’s bed at night, his purrs reverberated through the back of the house. But he could be a different beast with the rest of us. He was aggressive, running around at full speed, stopping only when he would sprint up to one of us and sink his teeth into an ankle. He would hiss and dart for the door when we went outside.

We decided that Max was an outside cat, and told our daughter that forcing him to live indoors was probably responsible for his surliness. We warned that an outside life carried with it some dangers — hungry predators, speeding cars, malicious humans. She decided that if outside was where Max would be most happy, outside was where he needed to be.

Max quickly went from stressed out to blissed out. He still spent time inside, sometimes snoozing beneath the lamp in my wife's quilting studio while she worked, and occasionally emptying her pincushion (you can watch him in action at YouTube; search for “Max” and “pincushion”). She eventually made him the subject of a small art quilt that appeared in Quilting Arts magazine in June.

More often, he ruled the yard. He provided the audience for football and soccer games. He crouched beneath the little dogwood tree, preparing to sprint after squirrels he probably knew in his heart he couldn’t catch. He oversaw yard work.

Soon he discovered life beyond our yard, sauntering across the street to spend time with our neighbors. I sometimes called him the Mayor, but I’m sure he thought of himself more as a king and of us as his subjects.

We grew accustomed to his being out and about, so much so that when we left town near the end of July for a few days, we did so without even a goodbye. We were far away when he was struck and killed near our house Aug. 2.

We weren’t there for him, but Max’s loyal “subjects” were. One of our good neighbors collected the body and brought it to our house. Another called and gave us the heartbreaking news, and then with two more put the body in a cooler, to give us time to get home so that we could give Max the burial that a cat of his stature deserved.

The next day, when my wife gently lifted him off the ice, and carefully took him out of the plastic bag, we saw that the fatal blow had left few marks. Even in death, he was our Beautiful Boy.

We dug a hole, and with our two girls we buried him in his beloved yard.

No one saw who or what hit Max, though it’s a reasonable bet that the driver was going too fast, not paying attention, or maybe both. But it’s hard for me to reduce eight years with Max to a safe-driving public service announcement.

Max reminded me that people and cats have got to do what they’ve got to do. We knew the risks involved in letting him out the door, but we knew that's where he had to be. He knew it too, and he made sure we figured it out and followed through.

The outdoors cut short Max’s time with us, but that’s where I will choose to remember him: lying contentedly beneath the little dogwood tree, happy with his kingdom, living his life the only way he could. 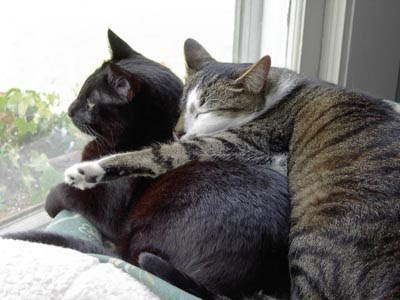