What a birthday party! 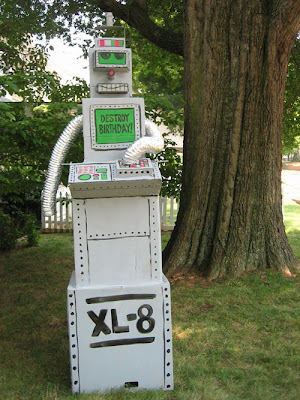 I just had to share a few photos of an amazing birthday party my neighbors down the street had for their 8-year-old son yesterday. They built a giant robot pinata (about 10 feet tall!) out of cardboard, and filled it with paper mache bombs packed with candy. I did not witness the destruction of the robot with a wooden bat (that would have been too sad!), but I understand that the kids had a blast, and no one was seriously injured. Except the robot, of course.

The creative geniuses behind this extravaganza are Dave and Kelly Sopp, owners of Wry Baby, a company that sells some of the most creative and warped baby stuff you can imagine. If you are looking for a baby shower gift that will stand out from all the cute pastel onsies everyone else is giving, look no further!

On the porch of their historic home, which Dave and Kelly are in the process of restoring inside and out, Kelly set out a nostalgic-looking spread of healthy and not-so-healthy goodies, including lemonade in big glass dispensers and sandwiches wrapped up in butcher's paper like you get at a good deli. 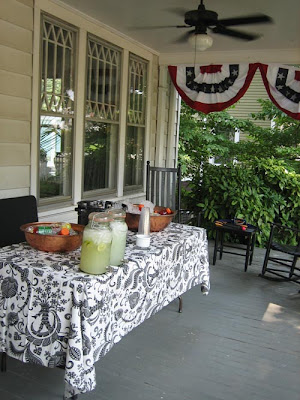 After they knocked the stuffing out of the robot, the kids went out back to play baseball and swing on an old-fashioned wooden tree swing.

What a party!
Posted by Susan Brubaker Knapp at 3:37 PM