This piece grew from my absolute despair and frustration over the mounting death toll from guns in America. The shooting at Marjory Stoneman Douglas High School in Parkland, Florida on Valentine’s Day hit especially close to my heart. The children killed and injured, and those who so eloquently spoke out afterward, could have been my own. In their faces, I see my children’s friends – the soccer players, the members of the marching band. The teachers, the football coach – they could have been my children’s educators.

The image of the rifle I painted is an AR-15, one of the most popular weapons of mass shooters, and the one used at Marjory Stoneman Douglas; I chose it to represent military-style weapons that are easily available in this country, and are chosen by mass murderers because they are very easy to use, and can inflict maximum carnage and the highest death toll.

The 17 blood-red roses represent the 17 teachers and young people taken at America’s latest tragedy, Marjory Stoneman Douglas High School. I wanted the roses to blot out part of the gun, and provide beauty against the ugly, mechanized lines of the rifle. They are linked (by the green vine) forever. The dove represents peace, and the Holy Spirit, who sits unafraid on the gun’s mouth. The stenciled gold clock gears symbolize time running out for the victims, and time running out for us to find a solution before we have more victims to bury. I chose this stencil design because it also resembles targets or bullet holes.

The space at the bottom was left purposefully empty, to suggest that there are many more deaths to come, that the death toll will rise until we compel our government to do something about our gun laws. 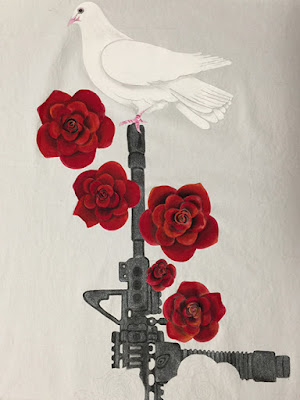 After painting the entire surface of the white fabric, I started to position pieces of white paper with “tic marks” to help determine the space needed for each of the victims killed in shootings during the last 35 years where AR-15s were the primary weapons. After I had the arrangement the way I wanted it, I painted the tic marks in a transparent gray paint. 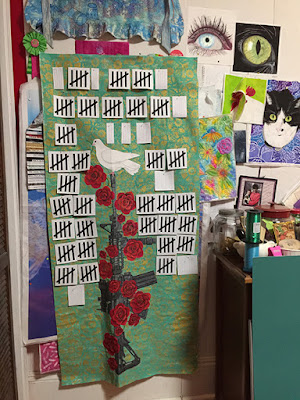 My timeline starts with the killing of two people in 1984. The next shooting, which killed six, was in 2007, followed by a shooting that killed 12.

Why the gap after 1984 with no deaths? Part of the explanation might be the Federal Assault Weapons Ban (officially the Public Safety and Recreational Firearms Use Protection Act, part of the Violent Crime Control and Law Enforcement Act of 1994) that prohibited the manufacture for civilian use of certain semi-automatic firearms it defined as assault weapons, and some ammunition magazines defined as “large capacity.” It only applied to weapons manufactured after the date the ban was enacted.

The 10-year ban was passed by Congress and signed into law by President Clinton on Sept. 13, 1994. It expired Sept. 13, 2004, in accordance with its sunset provision. The next mass shooting with an AR-15 was in 2007. Since then, the shootings have become more frequent and more deadly. The second row of tic marks in “Death Toll” indicate the elementary school students and their teachers killed at Sandy Hook Elementary in 2012. Look at how many people have died since then.

The following information is from USA Today’s article, “Why the AR-15 keeps appearing at America’s deadliest mass shootings,” Feb. 14, 2018.

The National Rifle Association has called the AR-15 — the semi-automatic, civilian version of the military’s M-16 — the “most popular rifle in America” and estimates Americans own more than 8 million of them.
The name AR-15 (AR stands for ArmaLite, not assault rifle, which is a common misconception) is trademarked by the firearms manufacturer Colt. But since the patent on the weapon's operating system ran out, a host of other manufacturers began making their own variants of the popular rifle.
The National Shooting Sports Foundation, the firearms industry's trade association, campaigned to have AR-platform rifles referred to as “modern sporting rifles,” or MSRs, both to avoid confusion and to try to stem the reference to the rifles with the politically loaded “assault rifle” label.
Here is a list of mass shootings in the U.S. that featured AR-15-style rifles during the last 35 years, courtesy of the Stanford Geospatial Center and Stanford Libraries and USA TODAY research: 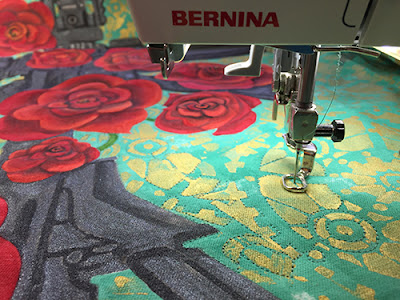 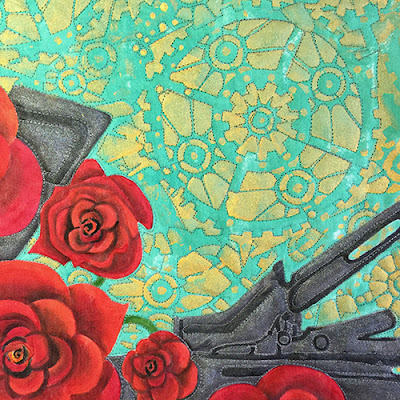 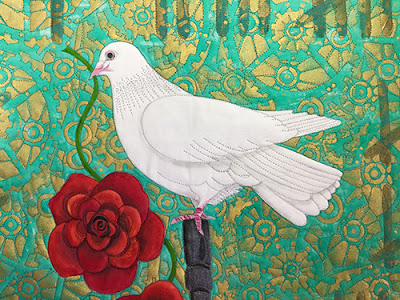 Last, I added the names of the cities and dates of the shootings involving AR-15s, with their groupings of victims. 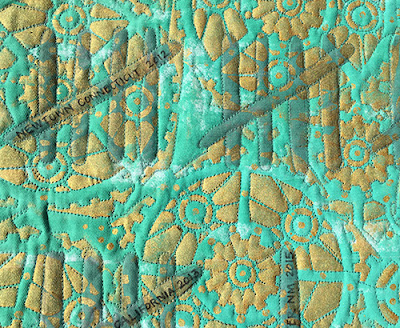 Posted by Susan Brubaker Knapp at 8:40 AM